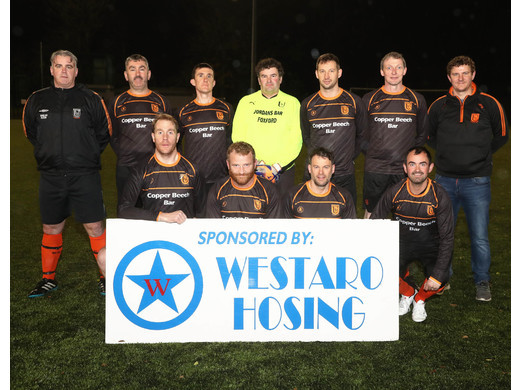 On the second night of football, the Masters gave to me: fiery local derbys, several yellow cards, scorchers from long distance, cold winter weather, 61 goals...and a partridge in a pear tree!

It was another busy evening of action in the last night of the Westaro Masters League before Christmas and the focus turned to the remaining games in Division 3 and the full round of Division 2 games.

The evening started with the meeting of neighbours Conn Rangers and Straide & Foxford United in a game that can be best summarised as 'feisty, not festive'. S&F claimed a 8-6 win when the dust was settled with goals for John O'Hara (x3), Michael Prendergast (x2), Cormac Healy, Paul Fitzpatrick and Chris Downey. Meanwhile, Patrick McHale (2), Eanna McHale, Noel Butler, John Clarke and Alan Dempsey scored the goals for Conn. The two sides occupy the bottom two spots in the division with Conn a point ahead of S&F.

Iorras Aontaithe and Ballyvary Blue Bombers played out a cracker that ended 5-2 to the Bombers. Mark Kilgallon netted a hat trick, which included two lobbed goals from distance, with goals for John Keaveney (x2) and Simon Cloherty as well, taking them to second place. Paddy Geoghan and Anto Mills' goals for Iorras were not sufficient on the night as they now sit fourth going into the break.

Ballinrobe Town will sit top of the table on Christmas Day following their comprehensive 10-0 win over south Mayo neighbours Claremorris B. Joey Maloney netted four goals while Pat Kelly helped himself to a hat trick. There were also goals for Brian Maloney, Gary Brown, Mark Gibbons and talisman JP O'Gorman, who finished his game slightly early, presumably with Sunday's McDonnell Cup final against Castlebar Celtic B on his mind.

Ballyheane played Ballyhaunis Town in the final game of the night in Division 2. Ballyhaunis held a 1-0 lead at the break through a Stuart Daly goal but Ballyheane hit back in the second half with goals coming from John Kelly (x2) and Peter Burke. Ballyheane continue to creep up the table; they now sit third, four points behind first with Ballyhaunis fifth.

It was goals galore in the first game of the night in Division 3 between Swinford B and Manulla B, which ended 16-5. Gerry Henry and Paddy McDonnell scored five apiece while Paul Kenny scored a hat trick. There were goals as well for Eddie Murphy, Enda Casey and for Thomas Regan. Regan started the game in goal but got itchy feet and traded places outfield with Billy Murphy, before helping himself to a goal. Meanwhile, Keith Bourke (x3) and Michael Cuffe (x2) scored for Manulla B, who are still looking
for a win.

We were headed for a Christmas miracle at half time in the other game in Division 3, between Swinford A and Castlebar Celtic B, a 0-0 draw in the Masters League with both teams scoreless at the break. Swinford sprinkled a bit of magic dust in the second half and came away with a 5-0 win thanks to goals from Pawel Staranowicz (x2), Johnny McNulty (x2) and David Golden, who scored a delicious volley.

Player of the day: After a cagey first half, Swinford A came to life against Castlebar Celtic and no player more so than Pawel Staranowicz, who inspired them to victory. He had a claim for a hat trick too, but it looked as though his free kick deflected off his teammate Johnny McNulty on the way in.

Goal of the day: Either one of Mark Kilgallon of Ballyvary Blue Bombers' lobbed goals from about halfway out against Iorras Aontaithe would deserve to be the goal of the night.

Goalkeeper of the day: Michael Kilgallon of Ballyvary gets the nod as goalkeeper of the week for keeping Iorras out of the game when they had many a chance to forge a way back into it.