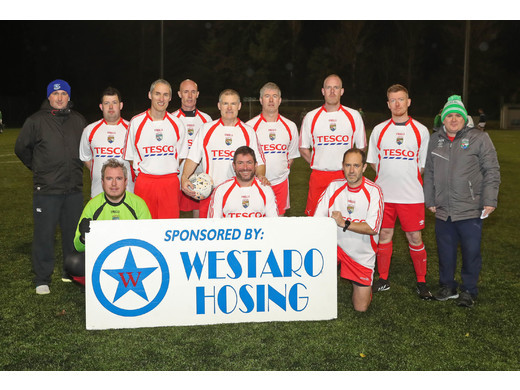 Ballina Town and Westport United kept their winning runs going after a stern examination of their credentials in Division One of the Westaro Masters League ahead of their blockbuster New Year collision following the Christmas break.

In the first Division One game of the night, Fahy Rovers hit the turbo button second half as they dispatched of Castlebar Celtic 5-2. Trailing by a goal at half-time from Martin Roache's first-time strike, Tommy Gill (two), Michael O'Rourke (two) and Larry Joyce fired Fahy to victory, with Stephen's Jennings long-range strike little more than consolation.

The first of two Division Three encounters saw Snugboro United remain among the top contenders with a 7-3 win over Ballinrobe Town B. Snugboro took a narrow 3-2 lead into the break through a Damian O'Toole own goal, Amro Elabbas and Alan Feeney, with Mark Gibbons levelling after O'Toole OG and O'Toole redeeming himself in reducing the deficit to one. Padraic Conway and Jonathan Duffy, either side of Gibbons's second for Ballinrobe, strecthed Snugboro's lead further before Dosah Abdalrahman and James McHale made sure of the three points.

Kilitmagh/Knock United secured an important 4-0 win over bottom-of-the-table Achill Rovers in a feisty contest in Division One. Kilitmagh/Knock were three to the good at half-time through Conor Groarke, Sean Garvey and Napier and Groarke made sure victory with a strike early in the second half.

Ballyglass will be top of Division 3 going into the Christmas break following a 6-3 victory over Killala. Killala led 2-1 at the interval through Alan Murphy and Ollie Clarke. Two penalties from Alan Plunkett edged Ballyglass ahead when Killala went down a man from Kevin Whyte's straight red. Murphy pulled one back for Killala but a brace from Jimmy Killeen and Plunkett's completion of his hat trick put a gloss on the final scoreline.

The final two Division One matches saw the top two, Westport United and Ballina Town, both pushed against their respective opponents, Manulla and Claremorris. Manulla gave a much improved showing this week but it wasn't enough to stop United, who ran out 6-4 winners. Jesper Frisch, Mark McNally, Niall Quinn and a thunderous strike by Sean Hoban looked to have United home and dry early on, with Keith Bourke pulling one back for Manulla. Two from Dessie Campbell (one from the penalty spot) and another Bourke goal almost pulled off a shock result for Manulla but Mark McNally completed his hat trick with two late goals to see United maintain their 100% record so far.

In the game of the night, Ballina Town came through a stern test by Claremorris to stay top of Division One on goal difference with a 6-3 victory. An Eoin McCormack free-kick and Cormac O'Malley put Ballina two up only to go behind midway through the second-half through Danny Broderick (two) and Mark Reapy. But the Town showed their battling qualities as Aidan O'Hora, Mark Moyles (two), Malachy McCarron and Seamus Giblin completed the comeback.

Player of the day: Alan Plunkett and Mark McNally are this week co-winners. Plunkett showed tremendous nerve putting his two penalties away for Ballyglass and completed his hat trick later in the second half against Killala to claim this week's award while McNally popped up late for Westport United's win over Manulla.

Goal of the day: Stephen Jennings long-range strike for Celtic and Danny Broderick's free-kick for Claremorris are honourable mentions, but Sean Hoban's venomous volley for Westport United was a cut above the rest.

Goalkeeper of the day: Paul Walsh, of Fahy Rovers, ensured Castlebar Celtic didn't go any further ahead with some top saves before Fahy began their comeback.