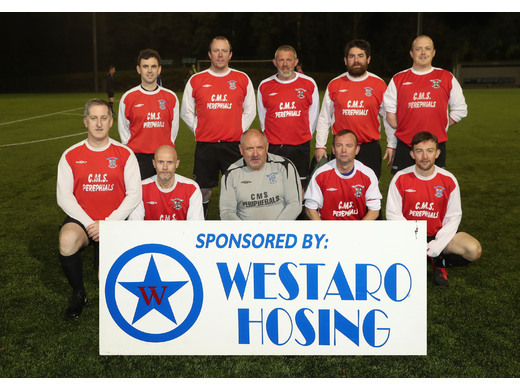 In the first game of the night in Division 1, Manulla had a comprehensive 8-2 win over Achill Rovers, who are still looking for their first points of the season. It was tightly poised at half time with the Blues leading Rovers 3-2 and Manulla hit five further unanswered goals in the second half. Manulla's goalscorers were James Cunningham, Dermot McNicholas and Dessie Campbell with two each and further goals from Paddy Canavan and Keith Bourke. Martin Keane and Brian Gallagher netted for Achill.

Kiltimagh/Knock United picked up their first win of the season in Division 1 in some style with an 11-4 win over Castlebar Celtic. Conor Groarke was in spectacular form and scored a double hat-trick. Conor Heneghan bagged a brace while there were also goals for Aidan Commins and Gavin Groarke but the pick of the lot came from a spectacular free kick, drilled into the top corner of the net by Damien Gallagher. Not bad for a goalkeeper! Goals for Celtic came from Sean McHale (x2), Robbie Johnson and Ciaran Heffron.

Ballyheane recorded a 6-3 win over Straide & Foxford United who are still looking for a first win in Division 2. Ashley Stevenson scored a hat-trick with John Kelly adding a brace and Theron Coghill adding the sixth with the last kick of the game. Meanwhile, Cormac Healy, John O'Hara and Michael Prendergast were on the scoresheet for S&F.

The sides who sit in first and second respectively, Ballinrobe Town and Ballyvary Blue Bombers played a 2-2 draw. A win would have seen Ballinrobe move five clear at the top of Division 2 but they were denied the win, thanks in large part to the goalkeeping work of Michael Kilgallon of Ballyvary. He couldn't stop efforts from JP O'Gorman and Conor Moloney from flying past him in either half but a brace from Simon Cloherty gave Ballyvary a hard-earned point.

The evening's highest scoring game was between Iorras Aontaithe and Ballyhaunis Town, with the north Mayo men coming out on top by a scoreline of 9-6. Pat Ginnelly (x3), Chris Barrett (x2), Mark Gilbert (x2), Seamus O'Malley (x1) and Gareth O'Malley (x1) were on the scoresheet for Iorras as they did enough to see off Ballyhaunis, whose goals came from Frankie Nolan (x4) and Stuart Daly (x2).

Conn Rangers picked up their first win of the season over Claremorris B, a comprehensive 7-3 win. Kevin Duggan, Darragh McGale and Brendan Vahey scored for the B's but Conn Rangers put away a succession of goals through Eanna McHale (x2), Mark McHale, Alan Dempsey, Patrick McHale, Aidan McLoughlin and Liam McHale to come away with the three points.

Player of the day: For a serious glut of goals, K/K United's Conor Groarke gets the nod. There were some excellent finishes among his six goals, including a lovely chipped finish.

Goal of the day: This also goes to a K/K man. Their goalkeeper Damien Gallagher scored a free kick of the highest order, be sure to watch the footage back on the club Facebook page!

Goalkeeper of the day: Michael Kilgallon's performance for Ballyvary went a long way to securing a point against table toppers Ballinrobe Town as he was put under constant pressure by JP O'Gorman and company.

Next week's round, Round 6, of Masters Football will be the last this side of Christmas. The Westaro Masters League will resume on Wednesday 5th and Thursday 6th of January, 2022.