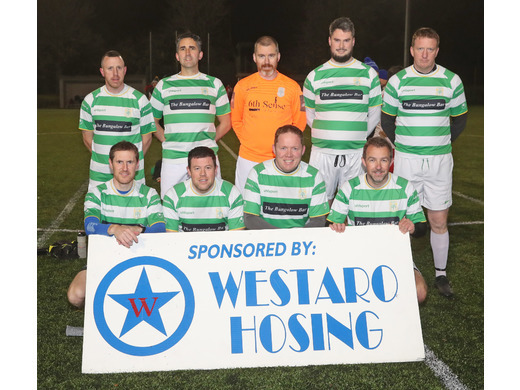 Westport United were given a stern examination by Claremorris but eventually passed the test with flying colours in the second half courtesy of a 6-2 win in a high-quality encounter. Two goals from David Hoban (one from the penalty spot) and strikes from Jesper Frisch and Mark McNally put United 4-2 to the good at the break, with goals from Mikey Mullins and Pauric Ring keeping Claremorris within touching distance going into the second half. United showed their class second half as McNally added another before Brian Kenendy put the result beyond all doubt.

Snugboro United picked up their second win in Division 3 following a hard-fought 4-2 victory over Swinford. Norbert Karol and Amro Elabbas put Snugboro in front following Johnny McNulty's opener for Swinford but the east Mayo outfit drew level before the interval following a wonderful curled effort by Adrian Forkan. Snugboro made sure of the win in the second half through Joe McDonnell and a second for Elabbas, while Snugboro goalkeeper Richard Byrne denied Swinford time after time with some excellent saves.

The other game in Division One saw Ballina Town respond to United's earlier win with a convincing 8-0 victory over Fahy Rovers. Mark Moyles claimed another hat trick while Duane Helly (two), Malachy McCarron (two) and Eoin McCormack completed another emphatic evening for the Town.

Nothing could separate Castlebar Celtic B and Killala in Division 3 as they played out an eight-goal thriller. Killala led 2-1 half-time through Conor McHale and Aaron Murphy, with Robbie Moore pulling one back for Celtic B. Two from Ronan Glynn and one from Kevin Scahill looked to have bagged the three points for Celtic B but Keith McLoughlin and Ollie Clarke's late equaliser ensured a share of the spoils.

The final game was a tight contest until the end but Swinford B picked up their second win of the campaign with a narrow 5-4 victory over Ballinrobe Town B. The Town led 3-2 at the midway stage through Mark Gibbons, Damien O'Toole and Brian Shaughnessy, Swinford B's goals coming from Eddy Murphy and Patrick McDonnell. Enda Casey levelled matters early in the second half and McDonnell completed his hat trick to put Swinford B 5-3 ahead going into the closing stages. A free-kick from Gibbons set up a tense finish but Swinford B held on for the win.

Player of the day: John Walsh had an evening to remember as he notched a double hat trick for Ballyglass in their win over Manulla B.

Goal of the day: David Hoban's volley for Westport United which went in off the underside of the bar was impressive but Swinford's Adrian Forkan's first time strike against Snugboro United which curled into the top corner was spectacular.

Goalkeeper of the day: Snugboro United's Richard Byrne claims this week's award following a fine performance between the posts against Swinford.