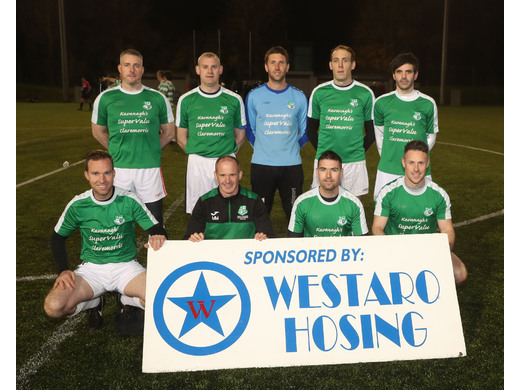 It was cold, rainy evening in Solar 21 Park on Thursday but this seemed to deter goalkeepers more than finishers as 76 goals were scored across six games, an average of over 12 per game

Two remaining games from Division 1 took place on the night, the first at 7pm as Ballina Town kept their 100 percent start to the season intact with a big win over Castlebar Celtic. It was tightly poised at half time with Ballina ahead 3-2 with a double from Eoin McCormack and another from Seamus Giblin. Meanwhile, Steven Jennings and Eamon Creane netted for Celtic. Two quickfire goals at the start of the half from McCormack and Duane Helly gave them a strong lead but a direct free kick from Robbie Johnson put Celtic to within two goals. A good string of saves from Kieran O'Malley kept Castlebar out of the game when they had many chances and Ballina would soon steady the ship with Steven Moyles adding four goals and Malachy McCarron another to give them a comprehensive 10-3 win.

The second game in Division 1 took place at 8pm and saw Claremorris dismantle Achill Rovers by a scoreline of 13-1. Danny Broderick was in fine form and netted eight of their goals, six of which came in the first half. Mikey Mullins and Pauric Ring scored a brace each and Jarlath Varley the other while Brian Gallagher scored Achill's sole goal.

The remaining action took place involving teams from Division 3 and Thursday provided a set of results that have blown the title race wide open and there are now just two points separating first place from fifth.

Ballyglass had a resounding 10-2 victory over Ballinrobe Town B. Although Ballinrobe took an early two-goal lead through Brian Shaughnessy's opening goals, Ballyglass never looked back. John Walsh and Stephen Broderick scored two goals apiece while there were hat-tricks for Jimmy Killeen and Alan Plunkett. The result leaves Ballyglass level on points in first

Swinford B and Snugboro United played out an epic 5-5 draw. Snugboro trailed 4-1 at the break with Swinford's goals coming from Tim Moriarty (x2), Ènda Casey and Eddie Murphy with James McHale scoring for 'Boro. In the second half, 'Boro launched a comeback and took a 5-4 lead with goals from Jonathan Doherty, Michael McDonnell, Richard Conway and Aaron Curry. Their joy was short-lived as just seconds later, Gerry Henry scored the equaliser for Swinford B. Swinford B are now fourth, two points off top spot.

Swinford A and Killala ended 4-4 and played out in similar fashion to the Swinford/Snugboro game. Killala took a 3-1 lead in at the break, only for Swinford to race out into a 4-3 lead in the second half. Once more, this lead lasted mere seconds as Killala levelled matters once again. Rory Gallagher (x3) and Alan Murphy scored for the north Mayo side while Johnny McNulty (x2) and Paul Halligan (x2) did so for Swinford.

The highest scoring game of the night saw Castlebar Celtic B defeat Manulla B on a scoreline of 15-4. Brian Mannion was the star of the show, scoring seven while there were also goals from Ronan Glynn (x3), Eoin Carney (x2) and a goal each for Kevin Scahill, Robbie Moore and Declan Lavelle. Keith Bourke, James McGing and Mick Cuffe (x2) scored for the Blues.

Player of the night: Brian Mannion's tally of seven or Castlebar Celtic B was impressive but he is beaten to this award by Danny Broderick, who scored eight for Claremorris.

Goal of the night: The nod goes to Richard Conway for his long range effort for Snugboro United. The strike had an extra bit of pizzazz to it - Conway's teammate Jonathan Duffy leapt over the ball like a salmon to prevent it hitting him on its way to goal.

Goalkeeper of the night: Ballina had a comfortable win in the end but when it was 5-3, Castlebar Celtic piled the pressure on Kieran O'Malley's goal and had more than enough chances to take control of the game. The 'Galway Player' responded admirably and pulled off a number of good saves at this crucial moment in the match.