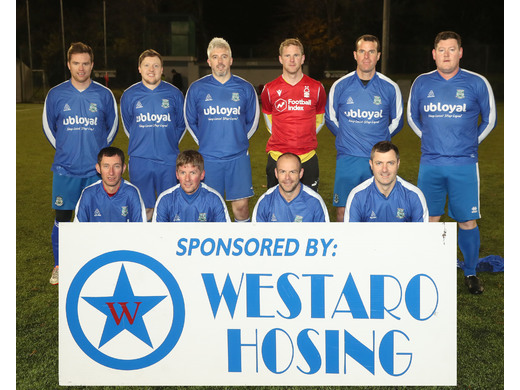 Comebacks were the theme on a cool but dry evening in Solar 21 Park as Manulla and Ballyvary Blue Bombers used their powers of recovery to record crucial wins in the Westaro Masters League.

Division 2 action kicked the night off and Ballyvary Blue Bombers went four points clear in second place following an excellent 5-4 comeback win over Claremorris B. The south Mayo outfit were two-nil up at the break through a header Mick Mullee and a deflected free-kick by Ken Mortimer. Ballyvary had a number of opportunities first half but were denied by an impressive performance by Ray Murray in goals for Claremorris. But Ballyvary came out a rejuvenated side second half as a second half hat trick by Simon Cloherty, as well as strikes by Declan Kelly and Mark Kilgallon kept the the pressure on the table-toppers Ballinrobe Town. Other goals for Claremorris came from James Cullinane and Darragh McGale.

Current leaders Ballinrobe Town look like they will take some stopping as they thrashed Ballyhaunis Town 8-1. Conor and Brian Maloney bagged hat tricks while JP O'Gorman (two), Joey Maloney and Pat Kelly kept up Ballinrobe's 100% record, while Frank Nolan netted a consolation goal second half. Ballinrobe will face a test of their credentials next week when they take on second-placed Ballyvary in what will be a cracking encounter.

Elsewhere in Division Two, Straide & Foxford Utd remain without a point after Iorras Aontaithe claimed a comfortable 7-1 win. Iorras were six to the good at half-time with Patrick Ginnelly scoring a hat trick before the break. Anthony Mills and Seamus O'Malley both got a brace Michael Costello got one in the second half for S & F.

The final Division Two game saw a seesaw battle between Conn Rangers and Ballyheane and it was Ballyheane who came out on top 6-4. Two from Ashley Stevenson and one from John Kelly gave Ballyheane a slender 3-2 lead at the break, with Conn Rangers staying within range through strikes by John and Eanna McHale. Stevenson and a thunderous strike by Padraig Mulroe looked to have secured the win but John and Eanna McHale struck again for Rangers to set up a nail-biting finish. But Ballyheane's John Kelly got his second late on to make sure of the three points.

The final two games of the night were Division One encounters, and Westport United sent a message to the rest with a 12-3 demolition of Fahy Rovers. United were 8-2 to the good at half-time through a Vinny O'Malley hat trick, two from James Gill and one each from Danny Scahill, Sean Hoban and Jesper Frisch. Fahy's goal in the first half came from captain Eric Carney and Colin Napier. Scahill netted a second while David Hoban scored a second half hat trick to complete the rout, with Napier netting for Fahy again late on.

The comeback of the night was from Manulla, who overturned a four goal deficit to beat Kiltimagh Knock United 7-6. Manulla took the lead twice through Dermot McNicholas and Keith Bourke, only to be pegged back twice through goals by Kiltimagh Knock captain Conor Groarke and Gavin Groarke. Conor Groarke completed his hat trick in the second half and additional strikes by Gavin Groarke and Damien Gallagher put Kiltimagh Knock in the comfort zone. But Manulla roared back as two goals from Damien Coleman and one each from Roger Clarke, Shane Durkan and Dessie Campbell competed a remarkable victory.

Player of the night: United's Vinny O'Malley and Ballinrobe Town's Conor and Brian Maloney were in excellent form. But Ballyvary Blue Bombers' Simon Cloherty led by example in inspiring his sides comeback against Claremorris B.

Goal of the night: There were plenty of spectacular long range efforts on the night, but the best of the lot goes to Ballinrobe Town's Joey Maloney, who fired in a brilliant strike with little backlift into the roof of the net.

Goalkeeper of the night: Conn Rangers threatened to reign in Ballyheane, but Ballyheane goalkeeper Sean Fahey ensured there wouldn't be another comeback on a night of them in Solar 21 Park with a number of key saves second half.