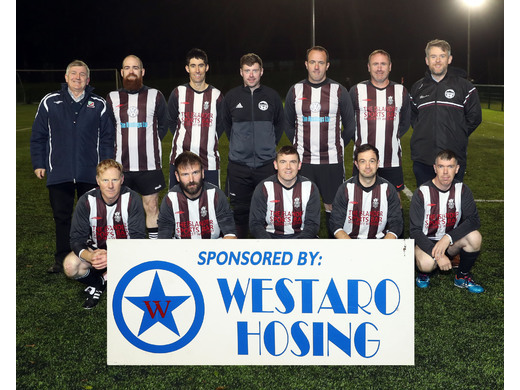 Fahy stun Claremorris, big wins for the Towns and United

It was a night more for putting your feet up in front of the fire than to play a game of football, but the inclement weather didn't stop a barrage of goals (55) raining down on the first night of action in Week 3 of the Westaro Mayo Masters League.

The shock of the night came in the opening contest as Fahy Rovers stunned Claremorris in an 11-goal thriller (6-5). Claremorris took the lead through Padraic Ring's header only for Fahy to equalise with a Colin Napier free-kick that sailed into the top corner. There was no stopping the black and white this half, with Fahy's Tommy Gill outstanding as he hit a first-half hat trick to put them 4-1 at the break. Danny Broderick's four goal haul for Claremorris in the second half almost secured them a share of the spoils but goals from Michael O'Rourke (two) and Guillaume Vaidie saw Fahy claim a second win in three games.

Westport United hit a magnificent seven in shutting out Kiltimagh/Knock United. Two from Mark McNally and one from Sean Hoban gave United a commanding lead. McNally completed his hat trick second half along with goals from Niall Quinn, captain Danny Scahill and Colm Keane.

Castlebar Celtic got their first win in Division One, but not without a scare as they fended off the comeback of Achill Rovers on a 4-3 scoreline. A first half double from Sean McHale put the Hoops in front at the interval. He completed his hat trick shortly after the restart and Ciaran Heffernan looked to have made it a comfortable night for Celtic. Achill's Martin Keane fired in a wonderful strike before goals from Manus O'Donnell and Mick Dara Sweeney set up a tense finish, but Celtic held on for the three points.

Eleven goals were also shared in the Division Two encounter between Ballinrobe Town and Iorras Aontaithe and it was the Town who prevailed
as they beat Iorras 7-4. Jason O'Donnell put Iorras in front but two from JP O'Gorman, one coming from a brilliant free kick, and one from Conor Maloney put
them 3-2 ahead at the break, with Henry Gaughan pulling one back for Iorras before the interval. JP completed his hat trick early in the second half and Maloney got another, with follow-up strikes from Ronan O'Dee and Mark Gibbons completing a fine win. O'Donnell and Paddy Barrett netted for Iorras second half.

The other Division Two encounter saw Conn Rangers remain without a win as they were blown away by Ballyhaunis Town, the east Mayo side putting eight past Rangers. Aiden McTigue claimed a hat trick while Michael Marigliano (two), Frankie Nolan (two) and Alan Canny also netted in a rampant performance.

The final game in Division One also saw eleven goals, but it was very much a one-sided affair as Ballina Town went top of Division One on goal difference following a 10-1 victory over Manulla. Steven Moyles scored his first three before half-time along with strikes by Mark Moyles and Duane Helly. Shane Durkan netted a fine consolation goal for Manulla but Ballina were in no mood to show mercy as Steven Moyles bagged his second hat trick in the second half, with Malachy McCarron and Cormac O'Malley completing the rout.

Player of the day: To hit a hat trick or more is impressive in any setting, but to claim a double hat trick is hat trick is a rare feat. That is exactly what Steven Moyles did for Ballina Town in their comprehensive victory over Manula

Goal of the day: Free-kicks from Ballinrobe Town's JP O'Gorman and Fahy Rovers' Colin Napier were excellent, but Martin Keane's strike for Achill Rovers against Castlebar Celtic was sublime. A fabulous strike on the half-volley, you knew it was going in as soon as he hit it.

Goalkeeper of the day: Ballyhaunis Town were a force going forward while at the other end, goalkeeper Tomas Colleran was letting nothing past him in keeping a clean sheet.