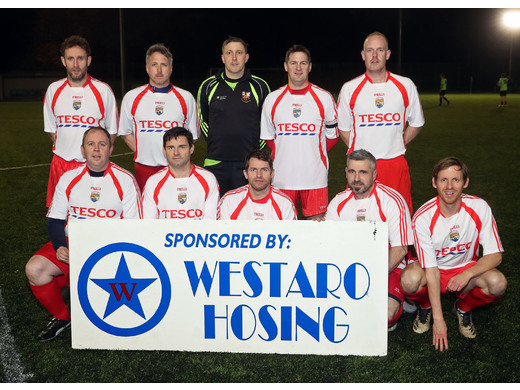 THERE was a bit of everything for night two's action on week two of the Westaro Mayo Masters League.

Wonderful goals were on show as well some thrilling fightbacks, with Claremorris and Ballyheane coming from behind to win while Westport United and Ballinrobe Town saw off some late resistance on a mild night in Milebush.

The two opening matches were arguably the best of the lot, with Castlebar Celtic taking on old rivals Westport United while Claremorris
entertained Manulla. An under-strength United side saw off the brave challenge of Castlebar Celtic on a 4-3 scoreline. Sean McHale gave Celtic an early lead only for Westport to go ahead through Danny Scahill and Jesper Frisch. Celtic had two big opportunities to go level before the break but a combination of the woodwork and United goalkeeper Danny Fadden kept United in front. Celtic did equalise through Ronan Flynn's free-kick but Frisch and Austin O'Malley put United ahead once more. Bryan Mannion pulled a goal back for Celtic but Fadden's spectacular display between the sticks meant United made it two wins from two.

Claremorris have also won their opening two games following a thrilling 6-5 victory over Manulla. They lead 4-2 at half-time through a brace each by Danny Broderick and Mickey Mullins but strikes by Damien Coleman and Jarlath Varley gave Manulla hope. Manulla took the lead with seven minutes remaining through Shane Durkan and a double by Roger Clarke but Claremorris would win the game in style. Paul Ryan levelled it for Claremorris before Broderick completed his hat-trick by scoring directly from a corner.

Ballina Town joined United and Claremorris on maximum points as they saw off Achill Rovers 5-1. They had a slender 2-1 lead at half-time through  Seamus Giblin and Mark Moyles, with Tom Sturate pulling one back for the islanders. Ballina went through the gears second half as Moyles got another before Duane Helly netted twice in the final moments, his second coming from the penalty spot after Martin Doolin handled on the line and was Doolin was red carded as a result.

The first of two games in Division Two then got underway as Ballyheane came back from a goal down to beat Iorras Aontaithe on a scoreline
of 3-1. Patrick Geogheghan put Iorras in front after three minutes but Ballyheane showed their class in the second half as two goals from John Kelly and one from Ashley Stevenson secured the win for the black and yellow.

The final game from Division One saw Fahy Rovers show their quality in the second half in seeing off Kiltimagh Knock United 5-2. The sides
were level at half-time, with Michael Rourke's early strike for Fahy cancelled out by KK's Conor Groarke. But another from Rourke and goals from Bill Buggy and Guillaume Vaidie (two) saw Fahy pick up their first win while KK, who saw Groarke net another in the second half, await their first.

The other game in Division Two saw Ballinrobe Town see off a late fightback by Conn Rangers to win 5-3. Goals from Brian Maloney and JP O'Gorman for the Town, either side of Liam McHale opener for Rangers, put them in front. Another for JP and a brace from Joey Maloney put daylight between them in the second half as strikes by Jamie Rice and Eanna McHale (pen) weren't enough for Rangers to secure a draw.

Player of the day: Danny Broderick's hat trick was crucial as Claremorris fended off a brave Manulla comeback, scoring the winner late on.

Goal of the day: Speaking of that late goal, you would take a tap-in in the circumstances. But to score directly from a corner is truly
spectacular. That is exactly what Danny Broderick did for Claremorris, who picks up two awards this week.

Goalkeeper of the day: Hard to look past the heroics of Westport United goalkeeper Danny Fadden as he ensured Celtic would not collect a share of the spoils with some wonderful saves throughout.