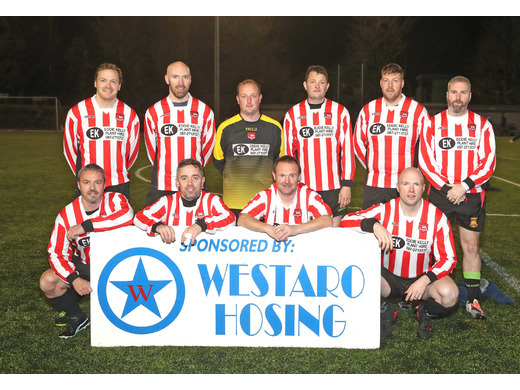 Killala showed once more why they are the team to beat in Division 3 with a big 13-3 win over Manulla B in one of two opening games of the night. Rory Gallagher was on fire once again, this week netting five to add to last week's hat-trick, with his final goal a contender for goalof the night. Conor McHale netted a hat-trick for the north Mayo men while Alan Murphy scored a brace. There were also goals for JP Guiheen, Paul Cummins and Kevin Whyte. Mick Cuffe netted two for Manulla B and Jason Flynn added the other.

Swinford A went one goal better on last week's 2-2 draw with their B team, this time beating Ballinrobe Town B 3-2. Johnny McNulty scored a brace, his opener coming late into the first half as some dogged defending from both teams. Robert Purdy also scored a fine free kick for Chris McHale-Roe's men while Mark Gibbons brace wasn't enough for their south Mayo opponents.

Snugboro United failed to follow up on their impressive 9-1 win last week, falling to a 4-2 defeat against a much-improved Ballyglass side. Alan Plunkett scored a hat-trick for the Candystripes and also laid on a brilliant assist for Michael Conroy. To their credit, Aaron Curry and Jonathan Duffy restored parity after United went in 2-0 down at half time but Ballyglass broke away in the second half to claim the win.

Swinford B put Castlebar Celtic B to the sword with a 7-3 victory. It was a cagey first half that ended 2-2 with goals for Ronan Glynn and Russell Gibbons for Celtic and Jakub Gawalkiewicz and Enda Casey in the opening 25. Swinford pulled away in the second half though, taking a quick fire burst of goals. Casey hit his second, Keith Robinson scored a brace, Paul Kenny scored one and so too did Paddy McDonnell to put them five goals clear. Kevin Scahill hit a late consolation for Celtic B.

The games from Division 2 took centre stage at 9pm as Ballyvary Blue Bombers laid down a big marker with an 8-1 win over local rivals Straide
& Foxford United. There were braces for Simon Cloherty, David Dodgson and Mark Kilgallon with additional goals scored by Declan Neary and Colm Kelly. Kelly's goal was a standout, as he booted it in from halfway down the pitch. Michael Smyth's goal levelled it up early on for S&F but that was good as it got for them.

Another local derby took place one pitch over at 9pm as Claremorris B recovered from their heavy loss against Iorras in week 1 to beat Ballyhaunis
Town 4-2. Kevin Duggan and Brendan French scored in the opening half and James Cullinane hit a brace in the second to seal the win. Ballyhaunis goals were supplied by Maurice Prendergast and Pat McGee.

Player of the day: Killala's Rory Gallagher looks as though he wants to get the Golden Boot sowed up good and early. Five goals against Manulla B earns him this award.

Goal of the day: Rory Gallagher claims this too for his fifth and final goal. It was a team effort as a quick counter attack saw Mikey Murphy release Alan Murphy on the wing with a lovely back heel. He found Gallagher in the middle who finished the move in perfect fashion.

Goalkeeper of the day: Pat Delaney of Ballyglass was kept extremely busy during their 4-2 win over Snugboro but he kept Aaron Curry and company quiet for the most part.