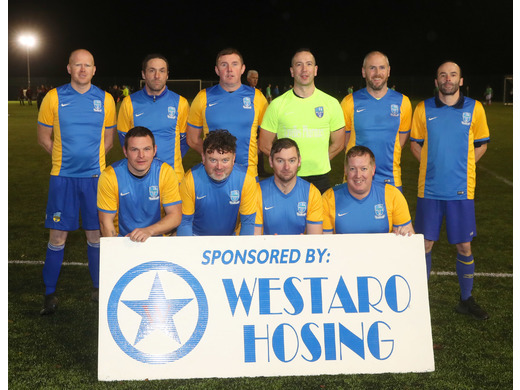 It was a mild, chilly sort of evening but thankfully the rain stayed ahead as we were once again treated to an avalanche of goals, with 50 scored across the six games.

The evening kicked off with one of the remaining games in Division 2 as Straide & Foxford United faced off against Ballyhaunis Town. The east Mayo outfit had to come from behind on more than one occasion to come away with their 6-4 victory. In the last 15 minutes of the half, they trailed 3-2 but a brace from Aiden McTigue and goals for Jason Power and Colin Glavy fired them to victory, despite the concession of a late goal, which proved to be a consolation.

The other game in Division 2 kicked off at 8pm and saw Iorras Aontaithe lay down a marker with a big win over Claremorris B. Brendan Nallen netted a hat-trick for the Erris men, three fine finishes that gave the goalkeeper no chance. Braces netted by Patrick Ginnelly, Garrett O'Malley and Jason O'Donnell, with another scored by Seamus O'Malley, took them to double figures. Brendan French's free-kick goal for Claremorris was
well-taken but far from enough in the grand scheme.

For the first time in the history of the Masters League, a third-tier league will be contested and it got underway with the meeting of clubmates from Swinford A and Swinford B. It was all A's during the first half and the 2-0 lead that Adrian Forkan and Paul Halligan gave them looked as though it would only grow. The B's had other ideas, and came away with a 2-2 draw, even more impressive considering they had only six players
from start to finish! Paul Kenny's brace tied the game up but it was the defensive work of Tim Moriarty that stood out, as he made a crucial goalline clearance to deny the A's the win late on.

It was all to play for at halftime with goals from Kevin Whyte and Rory Gallagher giving Killala a 2-1 lead against Ballinrobe Town B at the break. Pat McTigue scored the finest goal of a night, an effort that sailed into the top corner of the net from some 35 yards out to keep Ballinrobe within distance but a six-goal spree in the second half gave Killala an 8-1 win. Whyte added another, Alan Murphy scored a brace, Danny Gallagher popped up with one and Rory Gallagher, affectionally known as 'Giggsy' to his teammates, scored twice to complete his hattrick.

Snugboro United showed why they are many peoples favourites to win Division 3 with a resounding 9-1 win over Manulla B. Hat-tricks from Aaron Curry and Jonathan Duffy, an own goal and further strikes from Michael and Joe McDonnell helped them on their way while Shane Galvin
pulled one back for Manulla.

The most tense game of the evening was contested by Castlebar Celtic B and Ballyglass. Celtic led 2-0 at halftime with Kevin Scahill and Eoin Carney on the scoresheet. Ballyglass leveled it up in the second half after a lot of hard work. Brian Donnelly and JP Reilly provided the
goals. However, their hard work was almost for naught as Russell Gibbons restored the Celtic lead from a spot-kick. In the dying embers of the game,
Ballyglass made it a full-time scoreline of 3-3 when a lovely flick on by John Walsh was converted by Michael Conroy with a fine volley.

Player of the day: Killala's Rory Gallagher and Iorras Aontaithe's Brendan Nallen's would both deserve it for their goal contributions
but the nod for the night goes to Tim Moriarty of Swinford B. The former Urlaur Utd veteran was vital both in defence and in driving his team forward from the back, helping them secure a point against Swinford A despite having a man less.

Goal of the day: Their 8-1 defeat to Killala will be one they'll want to forget but Ballinrobe Town B's Pat McTigue will probably always remember his long-range goal from 35 yards.

Goalkeeper of the day: He may have conceded four goals but Ballyhaunis Town's Tomas Colleran did brilliantly overall to ensure his team won a wide-open game against S&F Utd. 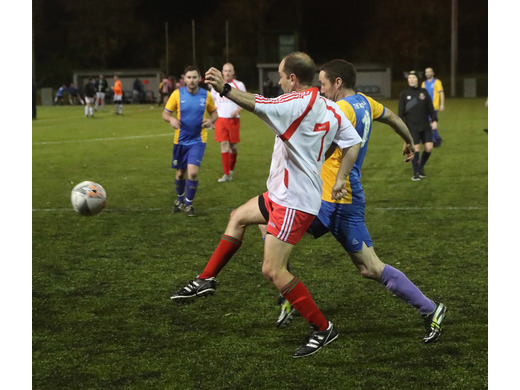