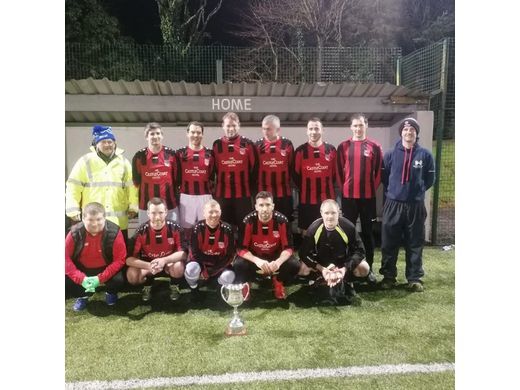 The Westaro Masters League returned to Solar 21 Park last night for the first time in 18-months as Westport United, Ballina Town, Manulla and Claremorris got off to winning starts in Division 1

NORMALLY at this time of year, there's the good (preparing our plans for Christmas) and the bad (clocks turning back, bad weather). But there's also the great, and nothing is sweeter that the return of the Mayo Masters League following an 18-month absence as a result of the Covid-19 pandemic.

The Over 35s of Mayo soccer dusted down their boots and returned to Solar 21 Park for the first night of action last Wednesday evening and with 55 goals on the first night alone, if this a sign of things to come between now and February we will be in for one hell of a show.

A sign of how much it has been missed is the record number of teams participating this year (24) from 19 different clubs, and a third division being added as a result.

But all eyes were on Divisions One and Two as they got underway and kicking off the action was 2020 league and cup runners-up Ballina Town. They sent out a strong message in their 9-2 victory over Kilitmagh/Knock United. Steven Moyles helped himself to a four-goal haul while Cormac O'Malley (two), Malachy McCarron, Mark Moyles and Micheal Noone also got on the act. For Kiltimagh/Knock, Andy Leadbetter netted both.

2018 champions Manulla opened their league campaign with an impressive 5-1 over Fahy Rovers. The first half saw Manulla captain Damien Coleman score twice and the other coming from James Cuniningham, with Michael Rourke pulling one back for Fahy. Manulla spurned a number of good opportunities second half but Cunningham completed his hat-trick in the second half to get Manulla off to the best start.

Reigning league and cup champions Westport United responded to Ballina Town's thumping win as they scored nine of their own in their win over Achill Rovers. The islanders took an early lead through Martin Keane but that would be as good it would get as Shaun Tagg, Jesper Frisch and captain Danny Scahill each scored twice with Joe Lawless, Vinnie O'Malley and James Gill completing the rout.

Claremorris went one better than Ballina and United as they fired ten past newly-promoted Castlebar Celtic. Claremorris were six to the good at half-time with two each from Pauric Ring and Jarlath Varley, an own goal by Declan Flynn and a spectacular overhead kick from David Grant. Celtic netted two through Ciaran Heffernan and Stephen 'Jinxy' Jennings but it did little to curtail the south Mayo side as Danny Broderick and Dermot Costello both got doubles of their own to send them top on goal difference.

The last two games of the night saw Division Two got underway. Ballinrobe Town saw off a spirited Ballyheane side 7-3, with five of their goals coming from Conor Maloney. He had his hat trick completed before half-time, with player/manager adding the other. Ballyheane pulled one back through David Sheridan, who finished with his own hat-trick, but another from Maloney and JP ensured maximum points for Ballinrobe Town.

The game of the night was played out between Conn Rangers and Ballyvary Blue Bombers, who couldn't be separated following a six-goal thriller. Level at the interval, Ballyvary thought they would take all three points through Conor Kelly (two) and Simon Cloherty. But Rangers struck late as Eanna McHale grabbed his second late on in a thrilling encounter that saw Alan Dempsey net the other for Rangers.

Player of the day: Ballina Town's Steven Moyles four-goal helping was very impressive, but the nod
goes to Ballinrobe Town's Conor Maloney, finishing with five of the best on the
opening night.

Goal of the day: You were spoiled for choice. Some long-range screamers from Ballina Town's Cormac O'Malley and Steven Moyles but Claremorris win this one following an audacious overhead kick by David Grant.

Goalkeeper of the day: Manulla goalkeeper Colin Walsh ensured there was no way back for Fahy Rovers with a commanding display.