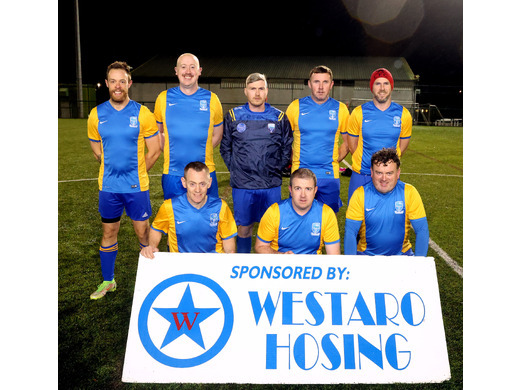 THERE was a goal fest at Solar 21 Park this week for the third round of the Westaro Masters League, which saw all games in Division 2 remarkably end up level

Conn Rangers and Ballyglass shared 16 goals in an early contender for game of the season. A match that saw the lead change seven times, Patrick McHale opened the scoring for Rangers but Ballyglass went ahead through a double by Alan Plunkett. Another by Patrick McHale and one by Aiden McLoughlin put Rangers 3-2 ahead at half-time but Ballyglass retook the lead early in the second half through a brace by Johnny Walsh, either side of an excellent strike by John Duffy, to lead 5-3. James Noone and another two goals by Patrick McHale put Rangers 6-5 up but back came Ballyglass to go 7-6 in front, one of the goals a great free kick by Padraic O’Connor. McHale and Noone appeared to have won it for Rangers but Eoghan Vahey ensured a share of the spoils with a late header to make it 8-8 at the end.

Iorras Aontaithe and Ballyheane both had chances to win their encounter but a point was secured for both leaving Milebush.
Arek Tobiaz put Ballyheane in front before the break. Brendan Nallen levelled matters for Iorras only for Tobiaz to fire Ballyheane ahead once more. Henry Gaughan scored the second equaliser for Iorras and while both teams hit the post in the closing stages, it finished a draw.

The final stalemate was between Castlebar Celtic and Achill Rovers, finishing 3-3. After several missed chances, Sean McHale put Celtic ahead before Kris Jablonski levelled with a long range strike. Stephen Jennings then went one better than Achill with a thunderous strike from 25 yards to put Celtic ahead at the interval. Martin Moran drew Achill level once again and Sean McHale looked to have got a late winner but Moran got his second in the final seconds to earn Achill a hard-fought point.

In Division 3, there were an incredible 20 goals in the match between Killala and Ballyglass B, with Killala coming out on top 13-7.
Ballyglass took the lead but that was as good as it got as Killala ran riot with four goals by Brendan McNulty two each from David Cadden and Paul Cummins, and one each from Kevin Whyte, Mark McLoughlin, Mark McDonnell, Niall Webb and Kevin Rooney. The goals from Ballyglass came from Steve Clark (two), Paul Rushe (two), Graham Cook (two) and Mike Waters.

Ballinrobe Town B returned to winning way with a 5-0 victory over Swinford. It was goalless at half-time, with Ballinrobe goalkeeper Derek O’Sullivan in top form. Peter Staunton broke the deadlock for Ballinrobe, with further goals by Damien O’Toole, Staunton, Brendan Vahey and Pat McTigue seeing the Town return to winning ways.

The other game in Division 3 between Straide & Foxford United and Ballyhaunis Town was postponed.

The three games in Division 1 took place on Thursday night as Ballina Town and Westport United continued their perfect start to the season while Claremorris got their first win of the season with a 6-3 win over Kiltimagh/Knock United.
Ballina Town took their goal tally to 25 after just three games with a comprehensive 8-1 win over Ballyvary Blue Bombers. Paul Moran was the star of the show for the North Mayo side as he hit four of the goals while Emmet Peyton made the most of his new role as he struck a hat-trick in an outfield role and Eugene Gorman was also on target for the joint league leaders. Simon Cloherty got the consolation goal for the Bombers.

At the same time Westport United also maintained their perfect start to the season with a 5-3 win over a determined Ballinrobe Town side who gave a very good account of themselves against the League Champions.  Westport had a mix of scorers as Jesper Frisch, David Hoban, Joe Lawless, Marck McNally and Austin O’Malley were on the score sheet while JP O’Gorman, Mark Gibbons and Conor Maloney got the goals for Ballinrobe.

In the final game of the week Claremorris had a 6-3 win over Kiltimagh/Knock United in another high scoring Division 1 encounter. Once again Danny Broderick was in goalscoring form as he hit two of the goals with Darragh McGale and Gavin Brady also scoring a brace for the men in green. James Carty, Conor Heneghan and John O’Hara were on target for Kiltimagh/Knock.

Goal of the Week: Some excellent strikes by the likes of, but none topped the unstoppable shot by Castlebar Celtic’s Stephen Jennings. As soon as it left his foot from 25 yards out, it was only going in the top corner.

Goalkeeper of the Week: Swinford were shut out against Ballinrobe Town B, largely due to the performance by goalkeeper Derek O’Sullivan who pulled off several top-drawer saves.

Player of the Week: Strong performance by Killala’s Brendan McNally,  Ballyheane’s Arek Tobiaz and Ballina Town’s Paul Moran but Patrick McHale for Conn Rangers was a cut above the rest. Without his four-goal haul, it could have been a much different story for Rangers.