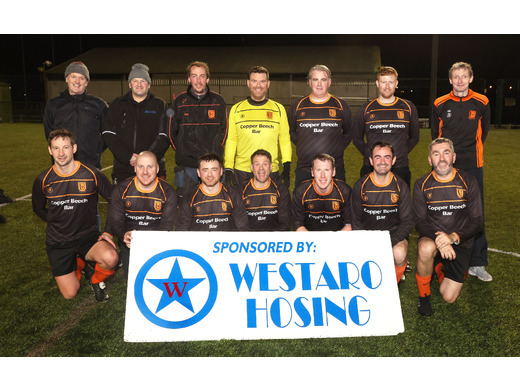 Last season’s promoted sides, Ballyvary Blue Bombers and Ballinrobe Town met and it was the Town who got the better of them following a 4-2 win. A low drive by Declan Neary put Ballyvary ahead but two goals in each half from the 2022 Division 2 champions got Ballinrobe off to flyer, Conor Maloney (two), JP O’Gorman and James Colfar ensuring Ballinrobe are off the mark with a win. Simon Cloherty netted a consolation for Ballyvary late on.

The reigning league and champions Westport United got their defence off to the perfect start after they beat rivals Claremorris 5-1. The south Mayo side were the only team to beat United last season and Danny Broderick gave them the perfect start with a rocket into the top corner. But United showed why they’re champions as Mark McNally (two), Joe Lawless, Jesper Frisch and Pat Moran all scored to send a message to all that they remain the team to beat.

Ballina Town will be hoping to usurp Westport United this season and they were in ruthless form on Night One, putting ten past Kiltimagh/Knock United. Kieran O’Malley goal kick caught everyone off guard as it sailed in to put Ballina in front. John Durkan and Paul Moran both recorded hat tricks, with Mark Beattie, Tom O’Connor and Aidan O’Hora rounding off a resounding win. Kiltimagh/Knock’s only goal was a delightful one, Gavin Groarke deftly chipping the goalkeeper.

In Division 2, Ballyheane came from behind to beat Ballyglass 5-2. The sides were level at the interval, a brace from Ballyheane’s Arek Tobiaz cancelled out by Alan Plunkett of Ballyglass. But Ballyheane upped the tempo second half as Tobiaz completed his hat trick before strikes Ashley Stevenson and Sean Kelly ensured last season’s Division 3 champions suffered defeat on the opening night.

Iorras Aontaithe drew on their powers of recovery as they came back from 4-2 down to beat Castlebar Celtic 6-4. Mark Gilbert and Brendan Nallen gave Iorras an early lead before Celtic went ahead through Sean McHale, Nicky Canning, Eoin Carney and Kevin Malone. But Iorras pulled off a remarkable comeback in the second half as Liam Donoghue, Seamus O’Malley, an own goal and Nallen’s second of the evening ensured maximum points for the Barony men.

The final game in Division 2 was the game of the night as Achill Rovers pegged back Conn Rangers twice to earn a point. James Noone and John Clarke put Rangers in front but Achill equalised through Tom Stewart and Kris Jablonski. Rangers thought they had got a winner through Patrick MacHale only for Michael Patten to ensure a share of the spoils.

On Thursday night it was the turn of the sides in Division Three to get their season underway in blustery conditions at Solar 21 Park. Straide & Foxford United laid down an early marker with a 8-2 win over Ballyglass B. Chris Downey, Patrick Jordan and Michael Prendergast all scored twice while Cormac Healy and Andy Neary also got their names on the scoresheet for Enda Grimes side. John Boyle and Eoin Hughes got the two goals for Ballyglass.

At the same time Ballinrobe Town B put three goals past Killala without reply to earn their first three points of the season. Pat McTigue hit a brace while Peter Staunton was also on target as the Robe B side made an impressive start to the new season just like their A team had the previous night.

The final game of the night kicked off at 9pm and it was one worth waiting for as Swinford got the better of Ballyhaunis Town by the odd goal in an eleven goal thriller. Patrick McDonnell was the hero for the winners as he hit a hat-trick with the other goals coming from Paul Kenny, Aiden Higgins and the evergreen Tim Moriarty. The Ballyhaunis goals came from Michael Krusina, Keith Robinson, Jason Powers, Vladimir Gibala and Marcin Balik-Nowak.

Goal of the Week: Danny Broderick scored a thunderbolt for Claremorris as did Peter Staunton for Ballinrobe B while John Durkan’s goal to complete his hat trick was a lovely lob over the ‘keeper. But Gavin Groarke’s sweet chip for Kiltimagh/Knock United tops the lot.

Goalkeeper of the Week: Hard to look past Ballina Town’s Kieran O’Malley. Composed in goal, he got the opening goal also for his side after his kickout caught out his opposing number.

Player of the Week: John Durkan and Paul Moran impressed for Ballina Town while Jesper Frisch was a constant threat for Westport as well as Patrick McDonnell for Swinford, but Arek Tobiaz arrived when Ballyheane needed him most. Without his hat trick, Ballyheane’s night may have turned out differently. 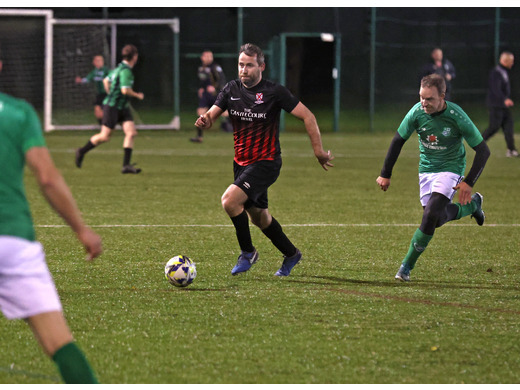 RT @KCsixtyseven: Joseph N'Do is the first former Achill Rovers player to work as a pundit on a World Cup. Unless @kdkilbane77 played a few…