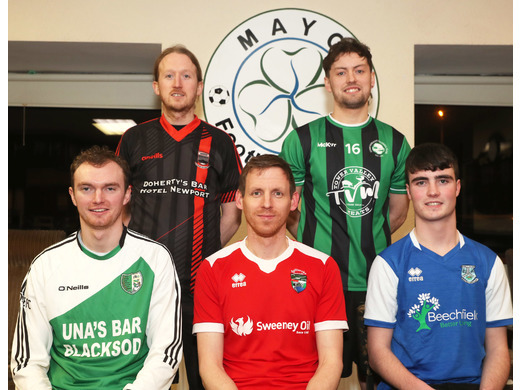 Ballyheane moved back to the top of the table after a 2-0 win over Castlebar Celtic at Celtic Park on Saturday evening. Two first half goals in two minutes settled the tie as Celtic’s chances of making a second half comeback were ended when Brian Walsh received his marching orders for a poor tackle on Sean Kilcoyne. Fionn Mahon was also sent-off late on, but the damage had been done in the first half thanks to a well taken header by Jack Tuffy and a set piece strike from Kilcoyne.

Midway through the second half in Belleek it looked like Kiltimagh/Knock United were going to pull of a shock result as they led Ballina Town by two goals, but they had to settle for a share of the spoils in the end as Oleg Vysochan and Ryan Moran struck late goals to earn Ballina a point after a 3-3 draw. On twelve minutes Mattie Leadbetter gave the away side the lead with an excellent strike after a brilliant ball in from Jack Mullarkey. Kiltimagh/Knock extended their lead on the half hour mark when Mullarkey got on the scoresheet, but PJ Gilmartin pulled a goal back for Ballina just before half-time. Just after the hour mark Kiltimagh/Knock restored their two-goal advantage thanks to Darragh Hanlon but Ballina never gave up and denied James Costello’s side the win thanks to those goals from Vysochan and Moran.

Claremorris remain rooted to the bottom of the table in the top division after a 1-0 defeat against Ballyhaunis Town on Saturday evening sees them still looking to pick up their first point of the season. Andy Cunnane’s goal proved the difference between the two sides as Ballyhaunis moved a point clear of the relegation zone.

Westport United joined Ballyheane at the top of the table on Sunday morning with a 5-1 win over Straide & Foxford United at Green Road. All the damage was done in the first half as Westport put four past the home side without reply with the first coming after just a minute as Darren Browne slotted home the spot kick after Dylan Duane was taken down in the box. Midway through the Brown turned provider for Duane as he played him in on goal and the hat-trick hero from last weekend made no mistake as he calmly finished to the bottom right-hand corner of the net. Browne than got his second of the day on thirty-seven minutes when he swept in a cross from Kevin Ketterick before Joe Lawless made it four as he headed in a corner from Jack Murphy that looped over everyone and into the back of the net. Darren Browne completed his hat-trick on fifty-five minutes as he put away a cross from Dylan O’Malley. Straide & Foxford did pull a consolation goal back but that was as good as it got for Aiden Flatley’s side.

Manulla and Glenhest Rovers played out a 1-1 draw in the final Super League game in Beltra on Sunday as Levi Barrett second half equaliser cancelled out Aiden Dunleavy’s early goal for Manulla.

CastleCourt Hotel Premier Division
Mikey Bourke struck a crucial late winner for Conn Rangers as they opened up a three-point lead at the top of the Premier Division with a 2-1 win over Ballyglass. It was scoreless at the break in Mount Falcon before Mark Butler gave Rangers the lead with a well taken goal early in the second half. Conor Burke levelled matters for Ballyglass with fifteen minutes to go but for the second week running Rangers struck late to take all three points as Bourke scored the winner with five minutes remaining.

Fahy Rovers got their first win of the season with a hard fought 1-0 win over Killala on Saturday evening. Simon Duffy scored the only goal of the game to earn John Creaby’s side all three points.

A twenty-five-minute first half blitz saw Crossmolina continue to hold the bragging rights over Moy Villa as they made it three wins from four games with a 4-1 win in Abbeyview. Two first half goals from Kevin Campbell as well as strikes from Stewart Griffin and Niall Coggins had the home side out of sight before Ciaran Gaughan pulled a consolation goal back for Villa in the second half.

Swinford proved much too strong for Kiltimagh/Knock United B in the only Premier League game on Sunday thanks to goals from Cian Reddington, Jack Murphy, Jonathon Sweeney and Paul Kenny. Reddington opened the scoring after a fantastic cross field ball from Martin Murphy before Jack Murphy added a second after another fantastic assist from Martin Murphy. Jonathan Sweeney added a third as Murphy turned provider before Paul Kenny stole the ball of a Kiltimagh/Knock midfielder and went on a solo run through the middle to finish pass the keeper. Kiltimagh/Knock did manage to pull a goal back from the penalty spot, but it was Swinford who moved into fourth place going into the Easter break.

Killeen Sports Ground League One
Ballinrobe Town continue their unbeaten start to the season with a 3-0 win over Hollister at the Green on Saturday evening. Goals from Jp O’Gorman, Shane Ryan and Chris Culkeen were ore than enough to see Maurice Walsh’s side move onto seven points after three games.

Manulla B made it three wins from three with a 6-0 win over Westport United C in United Park. The score line doesn’t tell the whole story as Westport were very completive in the game, but it was Manulla who’s were too strong for the young Westport side as they were clinical in front of goal. James Dunne scored a brace while the other goals came from John O’Connor, Kieran Tonra, Cian Mannion and Ciaran O’Connor.

Conn Rangers B got their first win of the season as they put six past Newport/Mulranny Wanderers without reply. They led by two at the break as player manager Patrick Armstrong and Shane Burke were on target for the North Mayo side. They added four further goals in the second half thanks to Peter Naughton, Tom Kemp and a brace from Kyle Neary.

Kilmore and Achill Rovers went into their League One tie level on points at the top of the table, but it was the North Mayo side who maintained their 100% record with a 6-3 win in a high scoring encounter at Fr. O’Brien Park. Achill broke the deadlock after only two minutes as Tiernan Cooney put them ahead, but it was Kilmore that dominated the rest of the first half and led 5-1 at the break. The equaliser arrived on eighteen minutes as Dylan Walker struck a 30-yard free kick into the top corner before Justin Healy gave the away side the lead as keeper Kian Gallagher provided the assist with brilliant ball over the top. Kilmore’s next goal came in the thirty-fifth minute and was a bit fortunate as Padraig Doherty’s cross flew over everyone and into the back of the net. Ryan Ruddy made it four with a half volley from a tight angle on thirty-eight minute and then Dylan Walker got his second of the day from the penalty spot after Justin Healy was taken down in the area minutes before the break. Achill were much better in the second half and Sean Mulchrone pulled a goal back also from the penalty spot on fifty-three minutes, but they had to wait until the final ten minutes to get their third thanks to Keith McGinty before Sean Brogan restored Kilmore’s three goal advantage as captain Sean Brogan got on the scoresheet in added time.

McDonnell Construction League Two
Castlebar Celtic B got back to winning ways on Sunday as they got a 3-1 win of Ballyheane B at Pat Quigley Park on Sunday. The first half was a tale of two penalties as Darragh Duffy converted from the spot for Ballyheane while Matthew Lydon did the same for Celtic. Liam King and Conor Joyce scored the goals in the second half that secured the win for Celtic.

Crossmolina B got their second win of the season with a 4-1 win over Conn Rangers C. Barry Molloy hit two for the home side with Mark Rothwell also on target with the fourth goal coming from a deflection of a Conn Rangers defender. The Rangers goal came courtesy of Danny Hopkins.

Killala B picked up their first points of the season with a 5-0 win over Fahy Rovers B at the Courthouse on Sunday afternoon. Michael Corrigan hit a hat-trick for the North Mayo side while Marcus Hunt also hit a brace in a convincing win for the men in blue.

Partry Athletic remain a point clear at the top of League Two as they continued to be very potent in front of goal after putting eight past Ballyglass B at Michael Keaveney Park. At half-time the teams were level at 1-1 but Neil Donnelly’s side were excellent in the second half to secure an 8-1 win. Finach MacGhabhann gave Partry the lead with a back post header following a cross from Connall MacGhabhann before Eoghan Vahey levelled matters minutes before the break. JP Sweeney then gave Partry the lead early in the second half and it was soon three as Ciaran Hennelly scored from the penalty spot. Sweeney then made it four thanks to Connall MacGhabhann who laid the ball onto him to finish into an empty net before they made it five thanks to an own goal off a Ballyglass defender. Ciaran Hennelly then got his second of the day before Connall MacGhabhann added a brace to complete the scoring.

There was another high scoring match in Concannon Park, but this was a real thriller as Claremorris B and Ballyvary Blue Bombers took a share of the spoils in a 5-5 draw. It was a game that both teams led by two goals at one stage but in the end, they couldn’t be separated despite the face that none of the ten goals came in the final twenty minutes of the game. Ballyvary were first to strike as they went two-nil up. Danny Broderick then became the star of the show as he provided an assist and two goals all before half-time. Broderick first came a minute after Ballyvary scored their second and the game turned on a head in the final three minutes before the break as Broderick set up James Kavanagh for the equaliser on forty minutes and then gave his side the lead in the final minute of the half. Broderick completed his hat-trick on fifty-six minutes as he got on the end of a ball from Gavin Brady but just like his side had done in the first half Ballyvary pulled a goal back almost immediately. The final three goals of the game came in five frantic minutes as Ballyvary levelled from the penalty spot and then Connor O’Keefe had Claremorris back in front as he lobbed the keeper from thirty yards, but Ballyvary equalised a minute later to complete the scoring for the day. The Ballyvary goals came from Dara Kelly (2), Alan Hall, Cillian O’Brien and Mark Kilgallon.