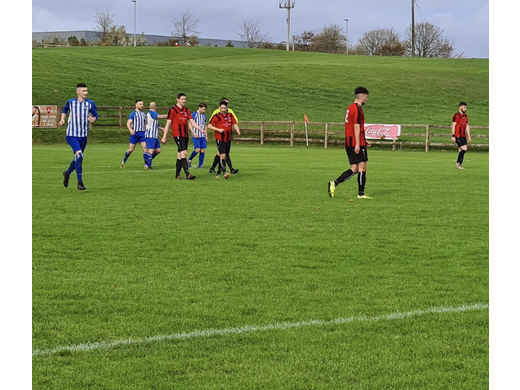 It was a mixed weekend for Mayo sides in the Connacht Cup, while Ballina Town dropped two points in the title race and Claremorris C and Manulla C clinched promotion from League Three

Ballina Town’s title challenge was dealt a huge blow on Sunday morning as Mikey O’Brien late equaliser for Westport United earned them a share of the spoils in a thrilling 2-2 draw at Belleek. O’Brien also provided the assist for the opening goal of the game in the twentieth minute when his free kick from the left wing was turned goal wards by James McGrath to give the away side the lead. Ballina were back on level terms just four minutes later when Jamie Cawley got the final touch after he reacted quickest in the box to meet a cross from the right wing. James O’Donnell came closest to restoring Westport’s lead before half-time when his long-range volley struck the crossbar after Ballina failed to clear a corner. Westport also came close again early in the second half when Harrison Quinn’s was denied after he got on the end of a cross from Peter Corcoran. Ballina then began to impose themselves on the game and they took the lead on the hour mark when they were awarded a penalty when Gary Cunningham took down Cawley on the edge of the area. Cunningham nearly redeemed himself as he got his foot to Dylan McKee’s effort, but the ball squirmed over the line to give Ballina the lead. Westport had a chance to level matters with ten minutes remaining when James McGrath was taken down just inside the area, but McGrath’s spot kick was well saved by Emmet Payton in the Ballina goal as it looked like the home side would hold out to claim a precious three points. It wasn’t to be though, and Mikey O’Brien had the final say as he finished at the back post after Peter Corcoran’s initial effort was blocked before O’Brien finished to the net. The point moves Ballina Town to within two points of Ballyheane at the top of the table, but Ashley Atkinson’s side now have a game in hand and could more or less seal their first ever Super League title when the sides meet in Pat Quigley Park in the next round of league games.

In the other early morning game in the division Claremorris secured another three points as an excellent first half performance seen them run out 3-1 winners over Manulla. Paul Burke’s side led 3-0 at the break thanks to a double from Finnian Brady and a Mark Maloney goal with Brady opening the scoring inside the opening fifteen minutes. Maloney doubled their lead midway through the half and Brady struck his second just before half-time as his ling range effort found the back of the net. Aiden Dunleavy did pull a goal back for Manulla seven minutes into the second half after some good work by Sean Corcoran but that was as good as it got for the men in blue as Claremorris seen out the game to help their chances of a third-place finish come the end of the season.

At the other end of the table Ballyhaunis Town scored a late winner as Andy Cunnane completed his hat-trick in injury time to move three points above the relegation zone with a 3-2 win over a young Castlebar Celtic at Celtic Park. Cunnane gave Ballyhaunis the lead after twelve minutes, but Luke Kelly levelled matters on the half hour mark only for Cunnane to put the away side back in front minutes later. Alan Quinn then had the sides level for a second time just before the break and we had to wait until deep in injury time at the end of the game for Cunnane to complete his hat-trick and secure what could be a massive win for the East Mayo side.

Glenhest Rovers wait for a league win this season ended in James McEvaddy Park on Sunday afternoon as they moved off the bottom of the table with a 3-1 win over Swinford. The win moves them above Swinford who now occupy bottom spot and level on points with Ballyglass who are now well and truly in a relegation battle. Mark Forrestal, Ciaran McCormack and Pat Mulchrone struck the goals for the Hest as they finally got a win after eleven attempts.

McDonnell Construction League Two
Crossmolina B and Hollister played out a 1-1 draw in the rearranged game in League Two on Sunday morning. The result does little for either side as it ends Hollister Chances of promotion and Crossmolina are no more or less guaranteed to finish in the relegation zone despite David Kennedy’s strike earning them a point.

CMR Fire & Security League Three
Claremorris C clinched promotion to League Two and now know a win in their final league game against Manulla C will see them crowned League Three Champions after they ended any hopes Ballyglass B had of promotion with a 4-0 win over their near neighbours. Newton Silva and James Cullinane had them two up at the break and Gavin Brady and the Veteran striker Mick Mullee added further goals in the second half for the home side.

Manulla C also secured promotion and ensured the title race will go down to the final day of the season when they will meet Claremorris C after a 6-1 win over Moy Villa B on Sunday afternoon. Roger Clare is still finding the net on a regular basis and the veteran striker scored yet another hat-trick as his side remained two points behind the league leaders. The other goals came from Gary Brampton, Mick Cuffe and James Dunne and a win against Ballyglass B next week will see them leapfrog Claremorris going into a winner takes all title decider in two weeks’ time.

The two sides that will meet in the League Three Cup Final in a few weeks’ time came up against each other today and it was Fahy Rovers B that came out on top as they ended Swinford B’s hopes of promotion with a 2-0 win in Fahy. Eric Carney and Colin Hastings got the goals for Paul Knowles side who continued to impress in the second half of the season.

TP Brennan Connacht Junior Cup
On Saturday afternoon Straide & Foxford United progressed to Round 3 with a 6-2 win over Galway League side Oughterard. Johnnie Cocozza and Conor Sherry both scored twice with the other goals coming from Chris Downey and Paul Moran.

Partry Athletic fell to a 2-1 defeat to Cregmore/Claregalway as the Galway side needed a second-half penalty from Tommy Callinan proved to be the winner after Partry’s Dylan Sweeney had equalised Ronnie Kenny’s first half strike.

Corrib Celtic B needed a penalty shootout finally see off Westport United B after the sides finished 3-3 after extra-time in a thrilling match in Annaghdown on Sunday afternoon. James Brennan scored a brace in normal time for Joe Kelly’s side while PJ Calvey scored the third goal in extra time before they lost 5-4 on penalties.

Conn Rangers also exited the cup as they somehow lost 4-3 to Athenry’s U21 side on Sunday afternoon in a game the Mayo League side dominated. It was a difficult day for the Rangers as despite goals from Moo Paw, Evan Reape and Eoin Prendergast they will look back on a poor defensive performance as they failed to reach Round 3.

Crossmolina reached Round 3 as they came from a goal down to record a 3-1 win over Galway side Knocknacarra. David O’Boyle, Ian Gordon and Vlad Gordetskyy were on target for Michael Canavan’s side as they continued their recent good run of form.

Kiltimagh/Knock United are another Mayo side that will be in the draw for Round 3 after a 2-1 win over Athenry B at a wet and windy CMS Park on Sunday afternoon. The first half was an even contest with Dylan Webb had the best of the chances, but he was foiled by man of the match Darragh Murphy in the Athenry goal as the half finished scoreless. Webb then broke the deadlock four minutes into the second half and Kiltimagh/Knock’s chances were further enhanced minutes later when Athenry’s centre back Darragh Nolan was sent off for a second yellow card after a late challenge. The home side doubled their lead on eighty minutes when Darragh Hanlon found the target. Athenry pulled a goal back in injury time as substitute Mark Lawless rounded Cillian Finn before slotting the ball past Enda Joyce in the Kiltimagh/Knock goal.

Ballinrobe Town also fell at the hands of a Galway league side as they lost 5-2 against Colga FC while Fahy Rovers were given a walkover by Glen Celtic.