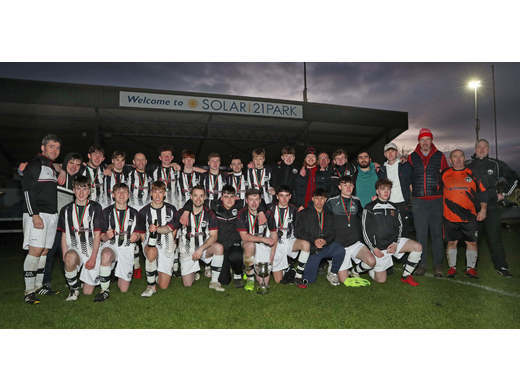 Westport United progressed to the last 32 of the FAI Junior Cup on Saturday afternoon, with their first away win in Dublin since 2005 as Dylan O’Malley goal was enough to see them past SVS FC. Dylan is the son of legendary United striker Vinny O’Malley and it was his goal that earned them their last victory on Dublin soil when he hit the winner against Killester as Westport went on to win the FAI Junior Cup that year. Westport took the lead on twenty-eight minutes when early substitute O’Malley slid in to get on the end of a right-wing cross from Cillian McGlade to turn the ball past the Killester keeper. In a game of very few chances it was O’Malley who also came closest to extending the away side’s lead when he hit the post after getting on the end of a weak back-pass from a Killester defender. It didn’t matter in the end though as United saw the game out comfortably to put themselves in the draw for the next round.

Ballyheane joined Westport United in the next round with an excellent 3-1 win away against Douglas Hall on Sunday afternoon. Ashley Stevenson’s side made light work of their Cork opposition as goals from Nathan Reilly-Doyle, Jack Tuffy and Michael Fahy were more than enough to earn the win while Douglas Hall pulled a goal back late on from a corner kick.

League Three Cup Final sponsored by The Print Depot
Fahy Rovers B are the divisional cup champions in League Three after they needed penalties to see of a spirited Swinford B side in Solar 21 Park on Sunday afternoon. Fahy led for most of the game but there was real drama in the final few minutes of normal time as ten -man Swinford equalised from a corner seconds after Paul Walsh had saved a penalty from Johnny McNulty. Fahy opened the scoring inside the opening twenty minutes as Eric Carney put them ahead after a mistake from Swinford goalkeeper Matt Murphy but just as it looked like they were going to lift the cup Swinford hit back with the late equaliser. On seventy-five minutes Paddy Moore was shown a straight red card after a challenge on the edge of the box denied Fahy a clear goalscoring opportunity but this did not end Swinford’s chances as they were awarded the late penalty. McNulty stepped up to take it, but his effort was brilliantly saved by Walsh in the Fahy goal, but he couldn’t do anything seconds later as player manager Paul Kenny headed in the equaliser with a bullet header from the resulting corner kick. Fahy couldn’t break down Swinford in extra time and the match went to penalties and eventually Fahy prevailed after sudden death eventually winning 6-5 after eight spot-kicks each.

Elverys Sports Super League
The drama began on Sunday morning in the bottom half of the Super League when Ballyglass were relegated to the Premier Division after they lost 5-2 to already relegated Swinford while Glenhest Rovers and Ballyhaunis Town survived as they drew one all at Station Rise.

Ballyglass knew a win would keep them up and at half-time it looked like they were on their way to three points as they led 2-1 but an outstanding second half display from Swinford saw them run out 5-2 winners in the end. James Devaney gave Swinford the lead on twenty-eight minutes but goals from PJ Gibbons and an outstanding volley from Dean O’Malley gave Ballyglass a half time lead only for Conor Devaney to level matters early in the second half. James Devaney then had Swinford back in front and as Ballyglass pushed forward they added further goals though Joe Slevin and a second from Conor Devaney to ensure that Ballyglass would be playing Premier Division football with them next season.

In the other game in the relegation battle Ballyhaunis Town and Glenhest Rovers played out a 1-1 draw which meant that both sides avoided the drop. Dayo Adex gave Ballyhaunis the lead from the penalty spot before half time but it was Glenhest’s own CR7 that once again came up with the big goal for his side as Chris Rowland levelled matters midway though the second half to make sure that both sides would stay up in the top division.

CastleCourt Hotel Premier Division
Straide & Foxford United tightened their grip on the title with a 9-1 win over Fahy Rovers as they moved to the top of the table for the first time this season. A win in their final game away to Snugboro United will see them finish the season ahead of Kiltimagh/Knock United but they will know that the East Mayo side will be ready if they slip up in their final game. They were in scintillating form today as Kienan Smyth struck four goals, Paul Fitzpatrick hit a brace and the other three goals came from Michael Guilfoyle, Paul Moran and Conor Sherry.

At the other end of the table Conn Rangers took a huge step towards survival with a 3-1 win over Manulla B as goals from Evan Reape, Adam Gallagher and Brian Hughes earned a vital three points for Nigel Reape’s men.

Iorras Aontaithe also boosted their survival hopes with a 2-0 win over Ballina Town B thanks to goals from Dylan Walker and Cillian Reilly.

Killeen Sports Ground League One
Two late goals in League One have thrown up the possibility of a three-way play-off not only for the title but for promotion as Moy Villa, Crossmolina and Kiltimagh/Knock United B all lie on twenty -nine points going into the final round of games next weekend.

Moy Villa just needed to win their final two games to secure the title but they needed a ninety-third minute equaliser to stay in the promotion race as Kilmore threw a spanner in the works in Drum on Sunday afternoon. The point also keeps Kilmore up as they moved four points clear of the relegation places with a big performance from their squad as they kept Moy Villa out until the final moments. Padraig Doherty gave Kilmore the lead midway through the first half with a contender for goal of the season as the midfielder struck a first -time half volley from thirty yards that flew past Patrick Keane in the Moy Villa goal and into the top right-hand corner of the net. As the game went on Moy Villa pushed more an more men forward but rarely threatened Dylan McAndrew in the Kilmore goals as they failed to create too many clear cut chances until they finally made the breakthrough as Luke Ruane tapped the ball into an empty net after John Durkan found him unmarked at the back post following a good run up the right-wing. Durkan then had a chance to win it with their final attack but his shot went harmlessly wide to the relief of the Kilmore defenders.

Matthew Leadbetter was the hero for Kiltimagh/Knock United B as his last-minute winner against Partry Athletic also kept them in the race for promotion with a 2-1 win over the South Mayo side. Leadbetter also got their opening goal as James Costello’s side picked up the three points as they got back to winning ways after a defeat against Moy Villa in their last outing.

Crossmolina also joined the other two sides at the top of the table with a routine 3-0 win over relegated Claremorris B in Concannon Park. Niall Coggins gave Michael Canavan’s side the lead before Fiachra Walsh doubled their lead with a screamer from outside the area and Shane Hennigan added a third as the North Mayo side got another crucial win.

Achill Rovers will need a win against Kilmore in their final league game as they fell to a 2-1 defeat against neighbours Newport/Mulranny Wanderers at Solar 21 Park. A goal in each half from Fintan and Aiden McManamon was enough to secure the points for the Wanderers as Achill see their fate going down to the final round of games in the Division where even a win might not be enough if Partry Athletic get a similar result in their final game.

McDonnell Construction League Two
Champions elect, Westport United C, finished off the league unbeaten as they came out on top in their final game against Hollister FC.
Westport opened the scoring mid-way through the first half when Cillian White picked up a clearance at the edge of the box and thundered a beautifully crisp strike to the top corner of the net. United doubled their lead shortly after following a flowing move and a cross from Kevin Kitterick to the back post where Liam King executed an exquisite header back across the goal, to give United a 2-0 lead at the interval. United added three further goals in the second Half. Dave Hoban finished another flowing move with a headed goal either side of two expertly executed Kevin Kitterick strikes. Danny Langdon scored a late consolation for Hollister with typical Langdon aplomb.
After the final whistle, Seamus Hughes on behalf of The Mayo League presented the McDonnell Cup to United's captain, Cillian White to the applause of the appreciative attendance. Westport's young squad will now prepare for the Premier Cup final against Premier League side, Westport United B in what should be an intriguing final.

Ballinrobe Town ended their season with another three points as they had a 6-1 win over Ballyvary Blue Bombers in Keelogues. Connor Ryan hit a hat-trick while the other goals came from Owen Corcoran, Shane Ryan and Liam Burke.

Castlebar Celtic B also had a big win over Crossmolina B as they also ended their league campaign on a high on Sunday morning at Celtic Park. Nicky Canning and Alan Quinn both scored hat-tricks while Luke Kelly and Cillian McNeela were also on target for Stephen Moran’s side. The Crossmolina goals came courtesy of Anthony Leonard and Edward Gough. 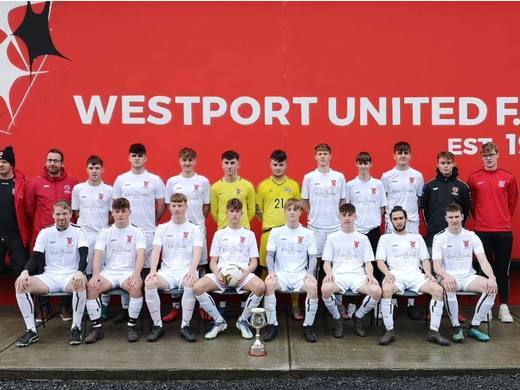