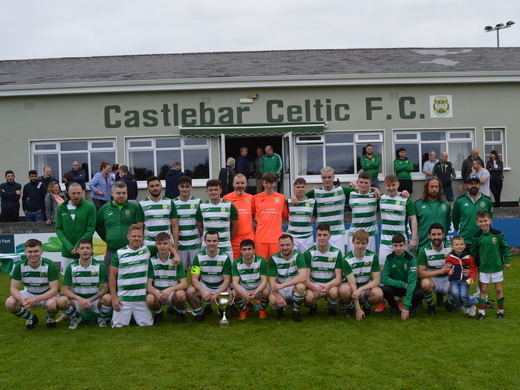 Westport United finished off their Super League campaign with a 6-0 win over Glenhest Rovers at United Park. Darren Browne gave his side the lead after a quarter of an hour as he got on the end of a left wing cross from Mark McDonagh to wrong foot the keeper with an excellent finish into the top left hand corner of the net. Kevin Kitterick made it two early in the second half as he headed in a cross from James O’Donnell and minutes later the same two players combined as Kitterick got his second of the day. Sean Heaney added a fourth with a long range effort that found the bottom right hand corner of the net just after the hour mark and Aaron Cannon and PJ Calvey also got on the scoresheet as Westport ensured a third place finish in the Super League.

Ballina Town secured their second place finish in the table as they put ten past Ballyhaunis Town in Station Rise. Benny Lavelle took his league tally to twenty four goals with four in this game while Ryan Moran, Jamie Cawley and Ted Rowe all scored twice for Mark Beattie’s side.

Kiltimagh/Knock United ended their season with another victory as they won 3-1 in Manulla to secure a fourth place spot in the table. Dylan Webb, Liam McCormack and Stephen Collins were on target for James Costello’s side who led by three goals at the break. Aiden Dunleavy pulled a goal back for Manulla from the penalty spot in the second-half that was as good as it got for the home team a Kiltimagh/Knock seen the game out to pick up all three points.

Champions Ballyheane finished the season with a 2-0 win over already relegated Claremorris in Concannon Park on Sunday afternoon. After a scoreless first half Niall Vahey gave Ballyheane the lead on the hour mark and he added a second fifteen minutes later to complete a memorable day for him after he had scored earlier in the day when Ballyheane B beat Claremorris B to seal promotion from League Two.

Castlebar Celtic and Straide & Foxford United played out a highly entertaining 5-5 draw as both sides picked up a point in the game of the day at Green Road. Luke Kelly salvaged a point for Celtic with a late late strike but it was Kienan Smyth that will steal all the plaudits as he hit four goals for Aiden Flatley’s side. Smyth opened the scoring on thirteen minutes only for former United player Johnnie Cocozza to equalise minutes later. Jason Hunt then converted a penalty to give Celtic the lead before the sides were level again as a Celtic defender deflected the ball into his own net. Mark Howley and Hunt with another penalty gave Celtic a two goal lead at the break but then Smyth took control of the game as he struck three times in just over twenty minutes to give Straide & Foxford the lead. It looked like the home side would take the three points as the game went into injury time but Luke Kelly had other ideas as the young striker levelled the game for the final time to earn a point for Stevie Gavin’s side.

McDonnell Construction League Two
Castlebar Celtic B won their ninth league match in a row to clinch the League Two Title after a 6-0 win over Conn Rangers C at Celtic Park earlier today. Celtic showed their intentions right from kick-off as they took the lead after about ten seconds as Liam Whyte stole the ball from a Conn Rangers defender before setting up Liam King to give Keith Regan’s side the lead. The result was never in doubt and Celtic went three up before half-time as Conor Joyce hit a brace to bring his league tally to seventeen goals and level at the top of the goalscoring charts with Cillian O’Brien from Ballyvary Blue Bombers. Adam Ahmed and Whyte added the next two goals as they both struck from outside the box before Ethan Minogue completed the scoring with a goal in injury time. Captain Ciaran Gavin then picked up the cup from Gerry Sweeney from the Mayo League and he dedicated the league win to former manager Michael (Scobie) Moran who passed away earlier this year.

Ballyheane B needed a win to seal promotion to League One and they did so in emphatic style as they put six past Claremorris B without reply at Pat Quigkey Park. It’s been a terrific season for Sean Kelly’s side who also won the McDonnell Cup in July after a win over Partry Athletic who they just piped to promotion with this win on the final day. Rory Morris hit a brace with the other goals coming from Niall Vahey, Shane Thomas, Darragh Scollan and a penalty from Sean Staunton.

Partry Athletic won their final game of the season with a 5-0 win over Ballyvary Blue Bombers but it was all in vain as Ballyheane B’s win meant they would finish just outside the promotion places. They were 2-0 ahead at the break as Ciaran Hennelly and Fianach MacGabhann  found the back of the net with the assists coming from John Byrne and James Canning. Hennelly then set up Martin Fox to make it three before Kian Flanagan added a fourth and Hennelly himself got his second of the day to make it five from the penalty spot.

Calor Gas Premier Cup 1st Round
A late goal from Aaron Faughnan earned Conn Rangers B a 2nd round tie against Claremorris B after a 4-3 win over neighbours Hollister on Saturday evening in Mount Falcon. In an eventful game Rangers took the lead inside ten minutes only for Daniel Maughan to level matter on twenty minutes with a stunning strike after he won the ball back in midfield before firing the ball into the back of the net from distance. Rangers went back in front through Ryan Merchant only for Hollister to equalise for a second time as Danny Langdon’s free-kick found the back of the net. Hollister went in front for the first time midway through the second half as Langdon once again found the back of the net from another free-kick with this one going in following a deflection off the wall. Aaron Faugnan then had the sides back on level terms as he scored from the penalty spot ten minutes later and just when extra-time was looming Faugnan popped up with a late winner in injury time to seal a derby win for Patrick Armstrong’s side.

In the only other Calor Gas cup match on this weekend Manulla B needed two goals in extra-time to see off Kilmore after the game finished scoreless at full-time in Carramore. In an even first half Kilmore had the best chance to take the lead as Dylan Walker’s effort when through one on one was well saved by the Manulla keeper. Manulla B were the better side in the second-half but couldn’t make their dominance count on the scoreboard as they failed to really test Ger McDonnell in the Kilmore goal. The breakthrough finally arrived in the first half of extra-time when Matty Nolan broke the deadlock with a composed finish after Shane Durkan sent him through on goal with a deft header. The second goal arrived midway through the second-half of extra-time as Cian Benson beat the offside trap before rounding the keeper and hitting the back of the net despite the best efforts of the Kilmore defenders to block his shot on the line. Manulla will now host Achill Rovers in the next round as Damien Joyce’s side have been given another home draw in Round Two

Quigley Cup Semi Finals
Ballina Town reached the Quigley Cup final with a 2-1 win over Westport United in a thrilling match on Saturday afternoon. Matthew Traynor and a penalty from Conor Gorman were enough to see the North Mayo side book their place in the final.

In the second semi-final Premier Division Champions Kiltiamgh/Knock United were much too strong for Division One champions Ballyheane as they won 4-0 at CMS Park. David Smith continued his good run in form in front of goal with two of the goals while Jack Conconnan also got one with the fourth been an own goal 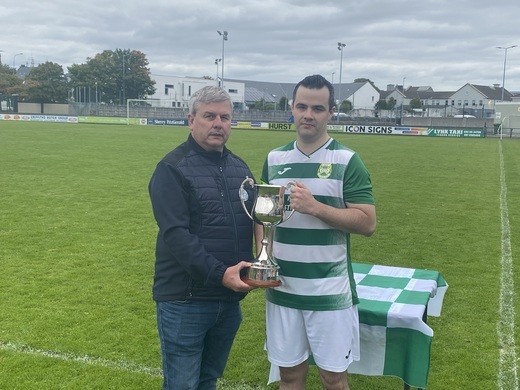 The Mayo U18 Squad face the Donegal League in a winner takes all game in Group 1 of the FAI Interleague Cup tomorro… https://t.co/S0AC36e0xr