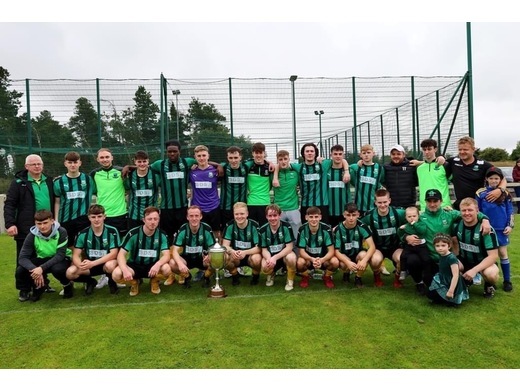 Ballyheane are back to back Super League Champions as captain Sean Kilcoyne picked up the Tom Kelly Cup for the second year in a row after a 4-2 win over Westport United in Pat Quigley Park. The home side only needed a point to become champions but it was evident the title was going to go their way early in the game as they went three goals up inside the opening thirty five minutes. Sean Kilcoyne opened the scoring from the penalty spot after Ben Edeh was tugged back in the box by Pat Moran before Nathan Reilly-Doyle and Dan Purcell put them into a very comfortable position going in at the break. Cillian Redmond added a fourth on fifty-two minutes as he toe poked the ball over the line after Westport failed to deal with a corner. Westport did fight back and pulled a goal back on seventy minutes through Darren Browne and Aaron Cannon added a second five minutes later but in truth Ballyheane always looked comfortable as they ran down the clock as they clinched the title with a game to spare.

Earlier in the day Ballina Town moved into second place in the table with a 4-1 win over Manulla. Jamie Cawley hit two for Mark Beattie’s side with leading Super League scorer Benny Lavelle and Conor Gorman also getting on the scoresheet in a comfortable win in Carramore.

Glenhest Rovers ensured they would be playing Super League football again next season with a comprehensive 7-1 win over Straide & Foxford United in Beltra. The result not only seen them safe but meant that Ballyhaunis Town and Claremorris would be playing Premier Division football next season. Keith Mulchrone hit a brace for Glenhest with the other goals coming from Paul McLoughlin, Mark Forestal, Cathal Chambers, Ethan Barrett and Eoin McNulty.

In the final Super League match Claremorris picked up the three points against Kiltimagh/Knock United with a 3-2 win in CMS Park but it proved fruitless as Glenhest’s win seen them relegated to the Premier Divison. Kiltimagh/Knock led on two occasions but Joe Slevin and Rokas Mikuckis levelled matters before Simon Butler hit the winner late on to earn Paul Burke’s side only their fourth win of the season.

CastleCourt Hotel Premier Division
Crossmolina completed their second successive league and cup double on Saturday evening with a big win over an under strength Killala side. It’s been a remarkable two years for the North Mayo side and they can now look forward to playing Super League football next season. Niall Coggins scored five to join Luke Ruane as the top scorer in the division, while Kevin Campbell scored a brace and the other goals coming from Shane Hennigan, Ian Gordon, Vlad Gordetskyy and Shane McKinley. Crossmolina finished the season two points clear of Conn Rangers at the top of the table but had to win their last nine league games to pick up the John Coleman Cup on the last day of the season.

Conn Rangers also had a comfortable win on Saturday evening to finish of the season in style as they won their sixth match in a row as they beat Kiltimagh/Knock United B in CMS Park. Moo Paw and Colm Rutledge both scored twice with the other goals coming from Adam Gallagher, PJ Gilmartin and an unfortunate own goal from a Kiltimagh/Knock defender.

Swinford won their second game in a row to book their place in the Calor Gas Super Cup as they beat Fahy Rovers 8-2 at James McEvaddy Park. James Devaney returned to goal scoring form as he hit four of the goals with his brother Conor getting two and Mathew also getting in on the act while the other goal came from youngster Conor Ryan who scored his first senior goal for the club.

McDonnell Construction League Two
Castlebar Celtic B came from behind to seal promotion and go to the top of League Two with a game to go after a 2-1 win over Partry Athletic at Celtic Park. The win means Celtic are now odds on to lift the title next weekend when they host Conn Rangers C while Partry will now need Claremorris B to do them a favour if they are to have any chance of making the third promotion spot. It could all have been so different as Martin Fox gave Partry the lead early in the second half but goals from Liam Whyte and Cillian McNeela earned another important three points for Keith Regan’s side.