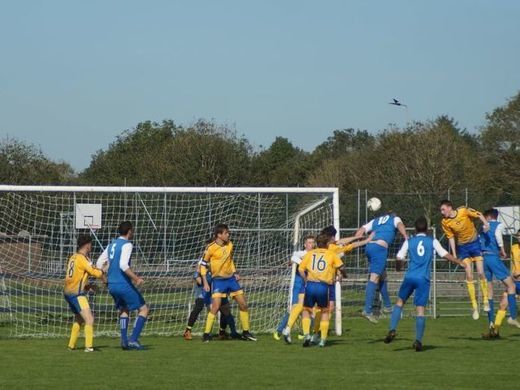 Snugboro United v Straide & Foxford United – Sun 11am – Solar 21 Park
Unbeaten Straide & Foxford United travel to Solar 21 Park on Sunday morning knowing that a win will secure them the title. They have been in impressive form in recent weeks, and it will be a huge surprise if Snugboro can cause an upset to hand the title to Kiltimagh/Knock United who lie just a point behind Aiden Flatley’s side. They have a lovely mix of youth and experience throughout the side with Paul Fitzpatrick, Ashley Atkinson and Paul Moran showing they are more than capable of leading the way at this level while youngsters Kienan Smyth, Johnnie Cocozza and Michael Guilfoyle have been key to their attack with thirty league goals between them this season. Snugboro fell to a big defeat against Westport United B last weekend and are unlikely to cause an upset on Sunday as Straide & Foxford look odds on to be Premier league champions for the second time in five years.

Kiltimagh/Knock United v Fahy Rovers – Sun 11am
Kiltimagh/Knock United will be expected to get a win when Fahy Rovers visit CMS Park on Sunday morning and will be crowned champions If Straide & Foxford United slip up in Solar 21 Park. Giles McDonagh’s side have the best defensive record in the division having conceded just six goals in twelve games and anything, but a win looks unlikely for the East Mayo side. At the other end of the pitch Dylan Webb is their key man with ten goals in all competitions while Cormac Caulfield and Darragh Hanlon are other players to look out for as Kiltimagh/Knock look to end the season with a win and maybe even be lifting the cup after 1pm if the result goes their way in the other top of the table clash.

Manulla B v Killala – 2pm
A win for Killala this weekend should be enough to ensure they avoid the drop when they travel to Carramore to take on already relegated Manulla B. The north Mayo side currently sit three points above the relegation spots and should have enough about them to get the better of a struggling Manulla side. Rory Gallagher is once again the top scorer for Killala and they will look to him to provide the ammunition in attack where Connor Barrett and Mathew Langdon-Long have also been in impressive form throughout the season. They will end the season against Ballina Town B next weekend so they will get a second shot at survival if the result doesn’t go their way this weekend.

Conn Rangers v Ballina Town B – 2pm
Conn Rangers look like they have done enough to stay in the Premier Division with wins over Killala and Manulla B in recent weeks and with Ballina Town B making the short journey to Mount Flacon on Sunday afternoon they will be confident that they will be mathematically safe with a game to spare. Rangers surprisingly found themselves in the relegation zone after been one of the favourites for promotion before a ball was kicked but their early season form failed to live up to expectations as they found themselves second from bottom with four games remaining. Since then, those two wins have seen them move up to sixth and a win in either of their final two games will see them play Premier League football again next season.

Killeen Sports Ground League One
There is a real possibility of a three way play off in League One as Moy Villa, Kiltimagh/Knock United and Crossmolina are all expected to pick up wins on Sunday afternoon while at the other end of the table Achill Rovers and Partry Athletic battele it out to avoid the final relegation spot.

Moy Villa v Claremorris B – Sun 2pm
Moy Villa title and promotion hopes were dealt a huge blow last weekend as they needed an injury time equaliser to get a point against Kilmore on Sunday last, but they will be expected to get back to winning ways when already relegated Claremorris B visit Attymass. A win will secure a play-off for Hugh Langan’s side while like Crossmolina and Kiltimagh/Knock United B they could be league champions if other results go their way. It was a massive surprise that they failed to win last weekend but that late injury time goal from Luke Ruane kept them in the title race just as it looked like they would go into the final day a point behind the other two sides. Moy Villa probably have the best chance of been League Champions on Sunday evening as Attymass is always a hard place to go and with Clarmemorris only picking up one point since the opening day of the season it’s hard to see Villa slipping up for a second week in a row.

Partry Athletic v Crossmolina – Sun 2pm
Crossmolina arguably have the toughest game of the three sides in the promotion race as they travel to Partry to take on Neil Donnelly’s side who themselves may need a win to avoid relegation this weekend. Crossmolina recent league form has been very impressive as they won their last three games scoring seventenn goals in the process as they had some big wins over Kilmore, Achill Rovers and Claremorris B. In attack they have a wealth of options with Niall Coggins and David O’Boyle leading the line while the likes of Shane Hennigan have made an impact of the bench in recent weeks. Kevin Campbell and Ian Gordon have been impressive in midfield while Stewart Griffen and Adam Gordon hold the defence together. Partry will not make it easy for Michael Canavan’s side but will need to be at their best if they have any chance of taking anything from this game to secure their survival. Ciaran Hennelly has returned from injury in recent weeks while Dylan and John Paul Sweeney will be their main threat in attack. All but one of their points this season have come against the two sides below them in the table so it would still be a major surprise if they were to cause an upset on Sunday.

Newport/Mulranny Wanderers v Kiltimagh/Knock United B – Sun 2pm
The third side in the title and promotion race are Kiltimagh/Knock United B and they travel to Solar 21 Park on Sunday afternoon where they face fourth place Newport/Mulranny Wanderers. Just like Moy Villa they were minutes away from been out of the race until Matthew Leadbetter late goal gave them the three points against Partry Athletic last weekend. The loss of Thomas Gillespie to suspension and some other injuries meant Leadbetter led the line last weekend and James Costello’s faith in him was rewarded when he hit both goals in that win. Newport/Mulranny may have nothing to play for but with the likes of Fintan and Adrian McManamon returning to the side in the last month they will fancy their chances of putting a dent in the promotion hope of Costello’s side. Kiltimagh/Knock will also look to Rafael Costa, Gavin Groarke and Luke Bennett to get them over the line to force a play-off or playoffs with the other two contenders.

Kilmore v Achill Rovers – Sun 2pm
Achill Rovers head to Drum on Sunday afternoon knowing that anything but three points and they will be playing League Two football next season. With only one win in their last eight games, they are favourites for the drop but playing one of only two sides that have nothing to play for in the final round of games will give them the believe that they can give themselves a chance of staying up. Kilmore got a very welcome point at home against table toppers Moy Villa last weekend to ensure their safety and they will be looking to finish the season on a high with a victory at home this weekend. Achill will be looking to their experienced players Terence Devers, Brandon McGing and Ronan Kilbane to lead them to victory but they know that even a win might not be enough if Partry also get a win in their final game against Crossmolina.