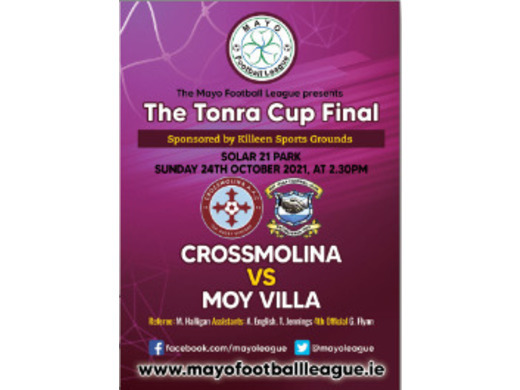 Two points separate these two teams at the top of League One with Moy Villa sitting above Crossmolina in second place with just four league games remaining. Moy Villa will be looking for revenge and their first win of the season over their North Mayo rivals after losing their recent league match where Crossmolina took the points with a 5-2 win in Abbeyview. In attack, Moy Villa have four of the best attacking payers in the division with Luke Ruane, John Durkan, Ciaran Gaughan and John Judge all capable of causing problems for any defence they come up against. Ruane and Dukan have thirty goals between them in all competitions with Ruane leading the way on nineteen goals with fifteen of them coming in his last five games while Gaughan and Judge are by far their most creative players in a side that have had little trouble in finding the back of the net this season. At the other end of the pitch, they have the best defensive record in the division as Patrick Keane and his three-man central defence provide a good base for Hugh Langdon’s side.
Crossmolina confidence was dented last weekend as they lost their first league game since the opening day of the season when Newport/Mulranny Wanderers got themselves back in the promotion race with a 5-3 win in Abbeyview. Crossmolina though will still fancy their chances of going up as they have the bottom four sides in the division to play in their final four league games. They have real quality all over the pitch and a great team ethic led by captain Kevin Campbell who is one of their leading players in the centre of the pitch. They are very strong right down the that line of the pitch where Adam Gordon and Stewart Griffen provide a formidable centre back pairing, Campbell and Ian Gordon are a strong centre midfield duo and David O’Boyle and the inform Niall Coggins would strike fear into any defence as the pair lead the line in attack. Coggins is a player of real quality, and the youngster is the leading scorer in the division with twenty-one goals in all competitions. Coggins links the play between midfield and attack and O’Boyle’s strength and work-rate has the potential to be a real thorn in the Moy Villa defence on Sunday. Crossmolina’s strength in dept may be the key factor in deciding the outcome as the like of Michael Maughan, Shane McKinley and maybe even Shane Hennigan are players that can made a difference and are all potential match winners for Michael Canavan’s side. Overall it is sure to be a match of real quality as Crossmolina aim to retain the Tonra Cup for another season and Moy Villa look to go one better than they did when they lost out to Newport/Mulranny Wanderers in the McDonnell Cup final in 2019.