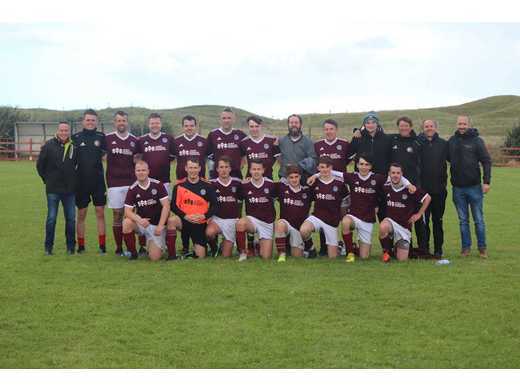 Crossmolina are the Tonra Cup Champions after a 3-2 win over Moy Villa while Ballyheane and Ballina Town both won at the top of the Super League.

Crossmolina retained the Tonra Cup title with a 3-2 win over Moy Villa in a really entertaining match at Solar 21 Park on Sunday afternoon. Michael Canavan’s side started the game brightly and were in front after only two minutes when Niall Coggins got on the end of a through ball from Ian Gordon and the star striker made no mistake as he sent the ball past Patrick Keane and into the bottom right hand corner of the net. Moy Villa came close to levelling matters minutes later when John Durkan rounded David O’Boyle in the Crossmolina goal only to see his effort cleared off the line before Luke Ruane blasted the rebound wide of the goal. Moy Villa looked the more dangerous side for the rest of the half, and they were rewarded on thirty-three minutes when John Durkan’s long ball over the top found Luke Ruane down the right wing and the striker held of the challenge from Conal Carolan to whip in a cross which Stewart Griffen headed past his own keeper under pressure from a Moy Villa attacker. Moy Villa dominated the early stages of second half and missed two big chances with the both of them falling to John Durkan who’s first header was well saved by David O’Boyle before been cleared off the line by a Crossmolina defender and his second went just wide after he got on the end of an excellent cross from Ciaran Gaughan. The turning point came just two minutes later when Kevin Langdon took down Coggins in the box and referee Martin Halligan issued a second yellow card to the defender, which gave Kevin Campbell the chance to put Crossmolina back in front. Campbell’s initial effort was saved by Keane but the keeper was adjudged to have been off his line and Campbell was given a second opportunity from which he made no mistake sending Keane the wrong was as he placed the ball into the bottom left hand corner of the net. To Moy Villa’s credit they did not give up and levelled for a second time on sixty seven minutes when Ciaran Gaughan got on the end of a through ball from John Durkan to wrong foot his marker before firing the ball through the legs of David O’Boyle and into the back of the net. The winning goal arrived five minutes later Stewart Griffen got on the end of a right wing corner from Conal Carolan and his header somehow made it over the line despite the best efforts of Keane in the Moy Villa goal. Crossmolina had numerous chances to kill off the game but they didn’t need to take them as they held out to ensure that the Tonra Cup would remain in the North Mayo town for another year.

Elverys Sports Super League
Ballyheane moved a step closer to their first ever Super League title triumph with a 5-0 win over Claremorris at Pat Quigley Park on Sunday. Ben Edeh and Liam Irwin both hit two goals each while Paddy Bourke was also on target for Ashley Stephenson’s side.

Ballina Town remain three points behind the league leaders after a 2-0 win over Manulla in Carramore as goals from Ryan Moran and Niall Casey kept them in touch at the top of the table. Next weekend they will have the chance to go level with Ballyheane as they host Westport United while Ashley Stevenson’s side have the bye before the two sides meet in the following round of league games in what could well be the key game in the chase for the title

At the other end of the table Ballyhaunis Town moved back out of the relegation zone with a 4-3 win over Swinford at James McEvaddy Park. Ballyhaunis first half performance was enough to seal the points for the East Mayo side as goals from Hamad Althohahey, Dayo Adex and Andy Cunnane put them in control before James Devaney pulled a goal back for Chris McHale-Roe’s side. Hamad’s goal was one to remember as he expertly executed and overhead kick, while Adex scored from a quickly taken corner and Cunnane’s goal came from a cross that missed everyone and ended up in the back of the net. Devaney pulled another goal back only for Adex to restore the away side’s two goal advantage from the penalty spot before Ian Price got Swinford’s third goal late on.

Ten-man Castlebar Celtic picked up three points on Sunday morning as they came from 3-2 down to record a 4-3 win over Ballygalss at Michael Keaveney Park. Celtic lost a two goal lead as goals from Colm Nevin and Liam Whyte were cancelled out by Ballyglass who stormed back with three goals of their own only for Bahso Hay and Fionn McMahon ensured Celtic left with the three points.

CastleCourt Hotel Premier Division
Kiltimagh/Knock United moved to within two points of sealing promotion back to the Super League with a 4-0 win over Snugboro United on Sunday afternoon. Sean Niland broke the deadlock on thirty-three minutes, and he doubled the home side’s advantage with his second goal right on half-time. The result was well and truly put to bed early in the second half as Dylan Webb made it three within a minutes and Cormac Caulfield completed the scoring with a well taken goal just two minutes later.

Straide & Foxford United also look odds on to join Kiltimagh/Knock United in the Super League next season after a 3-1 win over Westport United B moved them to within one win of promotion. Two goals from Johnnie Cocozza and a Kienan Smyth strike were more than enough to see of Joe Kelly’s side who may have still have had a cup hangover after lifting the Tuohy Cup last weekend.

McDonnell Construction League Two
Westport United C move a huge step closer to sealing the League Two title with a narrow 1-0 win over second place Ballinrobe Town at The Green on Sunday morning. Ballinrobe went into the game knowing they had to win against table toppers Westport Utd C to keep their title challenge on course. A tense and tight encounter ensued in windswept conditions.
Westport started well against the wind and almost took the lead after five minutes when Dylan O'Malley curled the balled over the bar with the goalkeeper stranded. Westport defended well in the first half and limited Ballinrobe to a few half chances; however, Robe should have opened the scoring five minutes before the break but Niall O'Malley spread himself and made a great point-blank save.
Playing with the wind in the second half, the breakthrough came for Westport midday through the half when Dylan O'Malley whipped a beautiful free kick in from  the right for Harrison Quinn to slot home with a side-footed volley. Ballinrobe pushed for an equaliser and almost scored in the dying moments only for JP Gorman to drag his shot wide from a tight angle. Westport's composure on the ball allowed them to see the game out to put them in a commanding position in the league with four games remaining.

Conn Rangers B kept their faint promotion hopes alive with a 2-0 win over Ballyvary Blue Bombers at Mount Falcon on Sunday afternoon. Goals from Adam Gallagher and Kevin McDermott keep them in touch with Ballinrobe Town, but they remain six points behind them with just four league games left to play.

In the final game in the division Ballyheane B moved four points clear of promotion with a 2-0 win over neighbours Castlebar Celtic B on Sunday evening.

CMR Fire & Security League Three
In League Three Claremorris C and Manulla C now look odds on to win promotion after wins over Moy Villa B and Swinford B respectively. Manulla C’s win over Swinford was the crucial game in the division as they opened up a two-point gap over the East Mayo side with a game in hand. Michael Cuffe, Jason Barrett and James Dunne scored for Manulla while Johnny McNulty got the Swinford goal.