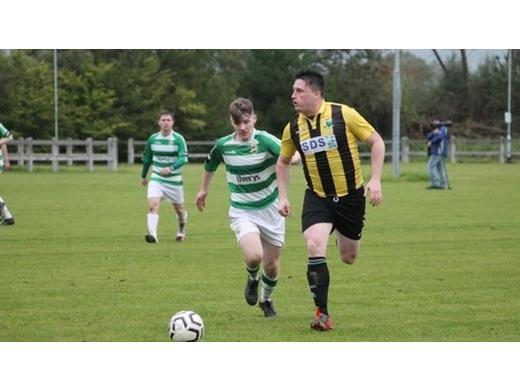 Liam Irwin in action for Ballyheane

Manulla v Ballyheane – Sun 11am
Ballyheane have a second chance to clinch the Super League title for the first time on Sunday morning when they make the short journey to Carramore to take on rivals Manulla. A few weeks ago, they were eight minutes away from winning it but a late equaliser from Dylan McKee kept Ballina Town in the race with two rounds remaining. Ballyheane lie two points clear of the Town with a game less played so will be confident that they can complete the job and would relish been able to pick up the Tom Kelly cup at their neighbour’s ground. Over the past two weekend’s they have had big wins in the FAI Junior and Connacht Cup so confidence will not be an issue for Ashley Stevenson’s side. Ben Edeh missed that game against Ballina and his return to the side will be a big plus for the Champions elect. Manulla have nothing to play for and will be glad to see the season finish but one big performance from Declan Kilkelly’s side could see the title race go down to the last day of the season.

Westport United v Claremorris – Sun 11am
This game has little consequence for either side as both have nothing to play for with two games remaining. The only thing up for grabs is third place which Claremorris can secure with a win on Sunday as they currently lie three points ahead of Mickey Feeney’s side. Westport’s season is far from over as they have yet to play the Calor Gas Super Cup Final against Ballyheane and are also still involved in the Connacht and FAI Junior cup after last weekend’s big win over SVS FC in Dublin. Claremorris are also into Round 4 of the Connacht Cup but face a few weeks break after next weekend’s final league game against Ballina Town. Both sides could still have a huge say on the title race if Ballyheane fail to beat Manulla on Sunday as Westport also take part in the final round of games when they take on Ballyheane at Pat Quigley Park.

Conn Rangers v Iorras Aontaithe – Sun 2pm
Conn Rangers secured their safety in this division last weekend while their opponents on Sunday may need a win to stay ahead of Ballina Town B in the battle for survival. It’s been a difficult season for Eamon Carey’s side who have struggled to get anywhere near same eleven on the pitch for two games in a row. Conn Rangers have noting to play for but sixth place, but the Mount Falcon based side will look to end a disappointing season on a high.

Ballina Town B go into the final league game knowing that even a win over neighbours Killala might not be enough to keep them up. They must pick up the three points and hope that Iorras Aontaithe fail to do the same in their match with Conn Rangers if they are to be playing Premier Division football again next season. Killala go into the game with nothing to play for but knowing them they will fancy ending the season with a win to give themselves a chance of moving another place up the table.

Killeen Sports Ground League One Title Play Off
Moy Villa v Crossmolina – Sun 11am – Solar 21 Park
The League One title is going to be decided by a play-off as Moy Villa and Crossmolina meet at Solar 21 Park on Sunday morning. These two sides know each other very well after meeting each other twice in the league and also in the Tonra Cup Final seven weeks ago. Crossmolina have had the better of those three meetings with two wins and a draw so Moy Villa will need to get their first win over Michael Canavan’s side if they are to finish the season as champions. Both sides will feel they have the quality to win this match but just like in the cup final there isn’t expected to be much between them. Luke Ruane leads the goalscoring charts in the division with twenty-one league goals to his name and the partnership he has built up with his strike partner John Durkan is sure to cause Crossmolina problems. Ciaran Gaughan tends to be their most creative midfielder but John Judge and Anthony Ruane are also capable of chipping in with their fair share of goals. The availability of Aiden Gaughan could be key to the outcome on Sunday as the midfielder is studying in the Uk. Crossmolina have their own star forward in Niall Coggins who lies just one goal behind Ruane and if you add in David O’Boyle, Shane Hennigan and Kevin Campbell they also have plenty attacking options. Campbell has formed a strong partnership with Ian Gordon in the centre of the pitch and this duo could be key to the destination of the title on Sunday afternoon. All in all a tie of real quality is expected and don’t be surprised if extra time or even penalties are needed to determine the winner.