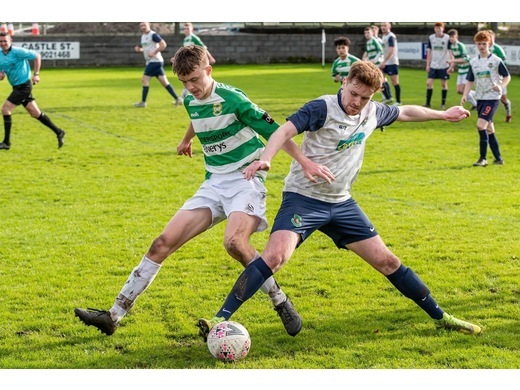 Ballyheane progressed to the outside draw in the FAI Junior Cup with a 4-0 win over Conn Rangers in Mount Falcon on Sunday morning. Nathan Reilly Doyle scored twice for Ashley Stevenson’s side with Paddy Bourke and Dean Fadden also on target for the Super League leaders who have the chance to wrap up their first ever top division title when they host Ballina Town in Pat Quickly Park on Sunday next.

Elverys Sports Super League
The action was in the bottom half of the Super League this weekend and Castlebar Celtic picked up another win as they took the three points on offer against Glenhest Rovers at Celtic Park on Sunday morning. The defeat leaves Glenhest in the relegation zone but with the two sides above them still to play they still have a chance of survival. Paul Walsh was the star of the show for Celtic as he scored a brace and was on hand to provide the assist for their third goal. Celtic did not have it all their own way and keeper Shaun Pugh had put in a terrific first half display to keep Glenhest at bay before Walsh opened the scoring for the home side just before the break. Walsh doubled their lead early in the second half and despite Gerry Hunt been sent-off they added a third as Walsh set up Luke Kelly to put the result beyond doubt.

Ballyglass came from 3-1 down to edge out a seven-goal thriller against Ballyhaunis Town to boost their survival hopes where a win next weekend against Glenhest Rovers will secure their survival in the top division. Liam Hughes was the star man for the home-side as he struck a hat-trick while Darren Murray was also on target from the penalty spot.

CastleCourt Hotel Premier Division.
At the top of the table the two sides that have already won promotion to the Super League as Kiltimagh/Knock United and Straide & Foxford United played out a scoreless draw at CMS Park. The point keeps Kiltimagh/Knock in control of the destination of the title as they remain a point ahead of Straide & Foxford with two games remaining. The game started at a fast pace and the first clear cut chance arrived on the twentieth minute when Paul Fitzpatrick sent Johnnie Cocozza through on goal but Enda Joyce narrowed the angle and Cocozza fired just wide. The visitors also came close shortly afterwards when Shane Malone headed just wide from a Fitzpatrick corner. Ronan Mallee and Darragh Hanlon also came close for Kiltimagh/Knock with Hanlon going closest when he forced Jamie Leahy into a fine save. Just before the break Straide & Foxford Kienan Smyth skinned the post with an effort after good work from Paul Moran and Cocozza. The second half couldn’t live up to the pace of the first half and both sides were limited to half chances. Moran and Cocozza had the best efforts for the away side while Hanlon and Conor Mooney had the best chances for Kiltimagh/Knock but neither side could break the deadlock and they remain separated by a single point in the title race.

Westport United B continued their preparations for the Calor Gas Premier Cup Final with a derby win over Fahy Rovers on Sunday morning at United Park. Goals from Dylan Duane and Aaron O’Toole got the goals for Joe Kelly’s side as they got their second win over Fahy this season whose goal came courtesy of Ciaran Kilcoyne.

At the other end of the table Ballina Town B threw away a two-goal lead against Manulla B as a late Shea Benson double earned the away side only their second point of the season. Ballina dominated the game and will wonder how they didn’t claim all three points after a goal in either half gave them a two-goal lead with twenty minutes to go. The turning point came when Manulla moved Shea Benson upfront and within a minute he had them back in the game with an excellent strike. Benson then stuck the equaliser as his free-kick from nearly thirty yards flew into the top right hand corner of the net to leave Ballina a point above the relegation zone.

Killeen Sports Ground League One
Kiltimagh/Knock United B maintained their one-point lead at the top of League One with a 4-1 win over Kilmore in CMS Park. In an eventful first half both sides were reduced to ten men as Thomas Gillespie and Gerard McDonnell were sent off for an off the ball incident. Kilmore then took the lead through Mark Gilbert before Mattie Leadbetter scored the goal of the day when he blasted the ball into the back of the net from over thirty yards. Jordan Henry then got the next goal for the home side midway through the second half and further goals Henry and Conor Groarke secured another three points for James Costello’s side.

Moy Villa kept in touch with Kiltimagh/Knock United B with a 3-1 win over Newport/Mulranny Wanderers in Solar 21 Park on Sunday morning. The defeat ended Newport/Mulranny’s promotion hopes as Moy Villa set up a top of the table clash with Kiltimagh/Knock next Sunday morning where the winner will put themselves in a great position to secure the title. John Judge scored a brace and Luke Ruane was also on target for Hugh Langdon’s side as they put the recent Tonra Cup Final defeat behind them in impressive style.

Partry Athletic moved a step closer to safety with a 2-1 win over a battling Claremorris B side at Concannon Park. The sides were level at the break, but John Byrne gave Partry the lead early in the second half as his free-kick from the halfway line was misjudged by the Claremorris keeper and found it’s way into the back of the net. Michael Heaney drew the home side level but JP Sweeney scored the winner as he poked home a free kick to secure a vital three points for Neil Donnelly’s side.

In the final game in League One Crossmolina kept up their pursuit of the top two sides with a 6-2 win over Achill Rovers in Fr. O’Brien Park. A David O’Boyle hat-trick did most of the damage for Michael Canavan’s side as Kevin Campbell, Shane McKinley and Shane Hennigan also on target for the Tonra Cup winners. Terrence Devers and Brandon McGing got the Achill goals.

McDonnell Construction League Two
Westport United C fought off a second half comeback from Conn Rangers B to earn a 4-3 win and move to within two points of the title with three games remaining in League Two. Westport led 3-0 at one stage as Ted Horan, Kevin Ketterick and Liam King had them in full control after just over half an hour had been played. Rangers pulled a goal back just before half-time as Kevin McDermott got his first of the day to give them some hope but Dylan O’Malley added a fourth for Michael Horan’s side early in the second half as the home-side looked to be coasting to victory. Ranger’s ha other ideas and McDermott persistence paid off as he stole the ball out of the fingertips of Niall O’Malley in the Westport goal before back heeling the ball into the net from a tight angle. McDermott then completed his hat-trick to set up a nervy finish for Westport as he curled the ball into the top right-hand corner of the net from just inside the box with five minutes remaining. Westport held out in injury time and came closest to scoring as Dylan O’Malley stuck the crossbar but ultimately, they picked up the three points that their first half display deserved.

Ballinrobe Town moved a step closer to promotion with a very comfortable win over Crossmolina B at Abbeyview on Sunday afternoon. JP O’Gorman continued his excellent form in front of goal with five goals while Jonathon Lawrence also hit a hat-trick and Adam Walsh and Joe Lydon struck their other goals.

Hollister kept their slim promotion hopes alive with a 3-2 win over Castlebar Celtic B while Ballyvary Blue Bombers will need a miracle to get out of the relegation zone after a 3-1 defeat to Ballyheane B.

CMR Fire & Security League Three
Manulla C moved to the top of League Three on Sunday morning with a 2-0 win over Ballyglass B to set up a winner take all final day of the season match with Claremorris C. Manulla will go into that game knowing that a draw will be enough to secure the title as they hold a one-point lead over their South Mayo rivals. Gary Brampton and Roger Clarke were on target today as Manulla made it five wins in a row since they lost to Claremorris C in early September.

Swinford B ended their league campaign with a 2-2 draw against bottom of the table Conn Rangers C at James McEvaddy Park on Sunday morning. The result had no impact on either side, but Swinford will be disappointed as they finished their league campaign with no wins from their last five league games. Kevin Breslin and Ethan Connolly got the goals for Conn Rangers who got another point on the board in what has been a difficult season for the North Mayo side.

In the final game in League Three Moy Villa B and Fahy Rovers B played out a 2-2 draw in Attymass. The Fahy goals came from Eric Carney and Jack Mulchrone.