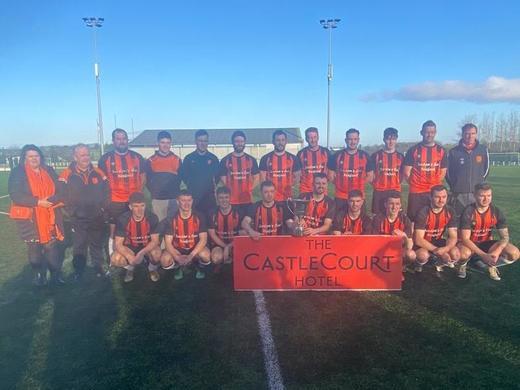 Ballyheane made it through to Round 4 of the Connacht Cup with a 3-1 win over Cloonfad United in their rearranged game on Sunday afternoon. Ballyheane opened the scoring with a clinical finish from Ben Edeh on seventeen minutes and Jack Rochford made it two from the penalty spot on the half-hour mark. Edeh added a third with a breakaway goal on sixty four minutes and Ballyheane coasted to victory despite Cloonfad getting a goal back through Conor Flynn on eighty minutes.

CastleCourt Hotel Premier Division
Straide & Foxford United wrapped up the Premier Division title with a 5-2 win over Snugboro United at Solar 21 Park on Sunday morning. Going into the game they held a one-point lead over Kiltimagh/Knock United and within twenty minutes it was clear that they would finish the season unbeaten as they led three-nil thanks to goals from Kienan Smyth, Tony McDermott and Paul Moran. Aiden Flatley’s side didn’t have it all their own way as Liam Morris pulled a goal back for Snugboro on the stroke of half-time, but Ronan McTigue’s side found themselves three behind once again as Michael Guilfoyle added a fourth for Straide & Foxford in the opening minutes of the second half. Morris then struck his second of the day for Snugboro, but Smyth wrapped it up for Straide & Foxford with his second of the day in the final minutes. Smyth had the chance to complete his hat-trick from the penalty spot in injury time but, his effort was well saved by the Snugboro keeper and minutes later their captain Chris Downey was presented with the cup by Mayo League Chairman Gerry Sweeney.

Kiltimagh/Knock United also ended the season with a big win as they beat Fahy Rovers 6-1 at CMS Park. Having already secured promotion they were hoping that Straide & Foxford United would slip up against Snugboro but it wasn’t to be their day despite picking up the three points to end the season on a high. Dylan Roache and Iarla Carty had them two up early on and even Fahy Rovers pulled one back before half-time they added four second half goals to seal the points. Roache scored the first two to complete his hat-trick and Carty added his second of the day before Roache added his fourth of the day to round off the scoring before the final whistle.

At the other end of the table Ballina Town B needed a stunning late equaliser from Michael O’Boyle to secure a 2-2 draw with Conn Rangers after they fell two goals behind early on. The point secures Premier Division football for Rangers who started the game brightly and went ahead through a free-kick from Moo Paw in the opening ten minutes. Evan Reape doubled their lead four minutes later but the Town got back into the game ten minutes later as Mark Moyles hit an unstoppable free-kick of his own. Ballina got the equaliser late on through O’Boyle but they will still need a win in their final game against Killala next week to give themselves any chance of survival.

Killala also sealed their survival with a 2-0 win over already relegated Manulla B. It was that man again Rory Gallagher who stepped up for the North Mayo side as he hit a goal in each half to ensure his side would be playing Premier Division football again next season.

Killeen Sports Ground League One
Newport/Mulranny Wanderers ended Kiltimagh/Knock United B’s chance of promotion and a three way title play-off with a comprehensive 7-1 win over James Costello’s side. The result was evident from early on as Newport led 4-0 after twenty five minutes and Kiltimagh/Knock failed to get going and the Wanderers ran out comfortable winners in the end. David Moynihan and Jack Hanley both scored twice while the other goals came from Sean Chambers, Aran McDermott and Paul Cafferkey. Shane Byrne scored the Kiltimagh/Knock goal after a good run from Luke Bennett set him up to score their consolation goal.

The result in Solar 21 Park meant Crossmolina and Moy Villa would be promoted if they won their games and would need a play-off to decide the destination of the title. Both sides kept up their end of the bargain as Crossmolina beat Partry Athletic and Moy Villa picked up the three points against Claremorris B.

Crossmolina had the tougher task and at half time held a slender one-nil lead but an excellent second half performance seen then record a 5-1 win over ten-man Partry Athletic to send the South Mayo side down to League Two. David O’Boyle scored that first half goal for Michael Canavan’s side and Niall Coggins scored twice in the second half with the other goals coming from Ian Gordon and Vlad Gordetskyy. Conall McGabhann pulled a goal back for Partry mid-way through the half but with Paul McAlpine sent off minutes before that it was always an uphill battle for Neil Donnelly’s side.

Mov Villa put eleven past bottom of the table Claremorris B as they put last weekend’s disappointing result in Kilmore behind them as they secured promotion at the second attempt. Ciaran Gaughan and John Durkan both scored hat-tricks while the other goals came from Luke Ruane (2), Tony Loftus (2) and Jason Crean. The play-off between Villa and Crossmolina to decide who wins the title will take place at 11am on Sunday next at Solar 21 Park.

A second half goal from Brandon McGing secured League One football for Achill Rovers as they battled to a 3-2 win over Kilmore in Drum on Sunday afternoon but things could have been so different if James Kelly’s shot wasn’t cleared off the line in the dying minutes. Kilmore went ahead inside five minutes as Jamie Flannery turned Mark Gilbert’s cross into the net at the back post after Achill failed to clear a free-kick from the right. Minutes later the away side were level when McGing got his first of the day as he got on the end of a through ball from Keith McGinty to fire past Dylan McAndrew in the Kilmore goal. Achill then went ahead when Terence Devers long rang shot found the back of the net only for Kilmore to draw level ten minutes later when Mark Gilbert hit a left foot volley from the edge of the area that flew into the bottom corner of the Achill net. Achill pushed forward in the second half searching for the goal that would keep them up and McGing was the hero as he calmly chipped the advancing McAndrew in the Kilmore goal midway through the half after a good move down the left wing. Achill kept Kilmore at bay to secure their survival but they did have their hearts in their mouths in the dying minutes after James Kelly rounded the keeper but his goal bound shot was cleared of the line by a relieved Achill defender