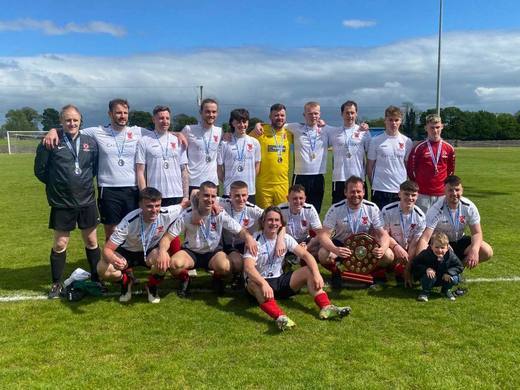 Westport United B are the Connacht Shield winners after a 3 - 1 win over Galway League side Knocknacarra in Lecarrow earlier today. United named a very strong starting eleven and despite an early chance for Dean Geraghty they were the better side in the opening period. The breakthrough goal arrived on twenty-five minutes when Adam Diamond-Keane’s free kick was only half cleared by the Knocknacarra defence and Oisin Ryall hit a sweet fist time shot that flew past Sean Kavanagh and into the back of the net. Westport’s second also came from a set piece and Diamond-Keane was once again the provider as his freekick from the right wing found PJ Calvey who headed the ball into the top right-hand corner of the net inside the final few minutes of the first half. Westport third arrived inside the first ten minutes of the second half when United broke on the counterattack through Conor Calvey and he found Ryall who chipped the ball over the onrushing keeper before calmly slotting the ball into the empty net from eight yards. Knocknacrra did pull a goal back through Kevin Cahalan on eighty minutes but Joe Kelly’s side seen the game out to add a third cup to their trophy cabinet after winning the Tuohy Cup and Calor Gas Premier Cup in the past few months.

Westaro Cup Round 2
A goal from Oran Groake was enough to send Castlebar Celtic into the semi finals as they knocked out the holders Ballyheane at Celtic Park on Sunday morning. Celtic put last weekend’s defeat to Manulla behind them with a huge win for Stevie Gavin’s side as they join Manulla, Ballina Town and Westport United in the draw for the semi-finals.

Tuohy Cup Round 2
The form side in the Premier Division had another comfortable win on Sunday morning as a hat-trick from Adam Gallagher helped Conn Rangers them to a 4-1 win over Kiltimagh/Knock United B. Evan Reape marked his return to first team action with the opening goal inside the first ten minutes. The away side didn’t have it all their own way in the first half as Kiltimagh/Knock levelled matters through David Smith on a quick counter attack after twenty-five minutes, but Gallagher got his first of the day minutes later after good work down the wing by Mikey Bourke. Gallagher added two further goals in the second half to send the North Mayo side into the semi-finals as Mark Togher’s side made it five wins in a row in all competitions.

McDonnell Cup Round 2
Partry Athletic joined Castlebar Celtic B, Ballyvary Blue Bombers and Ballyheane B in the semi-finals of the McDonnell Cup as they knocked out the holders Fahy Rovers B after a 2-0 win in Fahy. After a very even first half where Eoghan Lally went closest for the away side they broke the deadlock early in the second half through a quickly taken freekick from Conall MacGhabhann. They had to wait until late in the game to get the insurance goal as Kian Flanaghan set up Ciaran Hennelly to seal Partry’s place in the semi-final draw.

TF Royal Hotel & Theatre U21 Division Two
Ballina Town closed the gap at the top of the table to three points as they recorded a 4-1 win over leaders Claremorris in Concannon Park. Two goals each from Ryan Moran and Pj Gilmartin earned a very impressive win for Eamon Kenny’s side who will have a chance to join Claremorris at the top of the table when they get to play their game in hand against Ballinrobe Town. Mark Maloney got the goal for Claremorris.

Ballinrobe Town had a good win against Swinford in the only other U21 match on Sunday as they recorded a 4-2 win at The Green. Ballinrobe had a two goal lead at the break as they went in 3-1 up thanks to goals from Sean Vahey, Conor Ryan and a penalty from Danny O’Toole all inside the opening half hour. Owen Corcoran added a fourth for the South Mayo side and despite Swinford pulling another goal back they held out to make it two wins from four games to keep their promotion hopes alive.