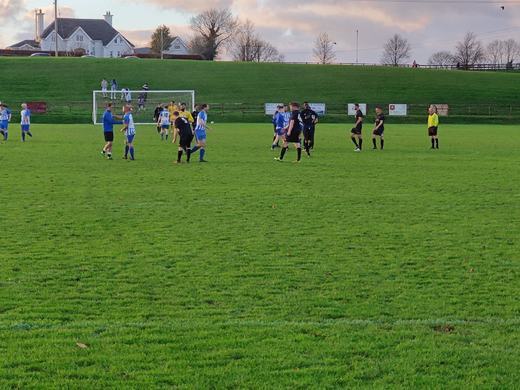 It was a good day for most of the Mayo League sides in Connacht Cup action as Ballina Town, Claremorris, Castlebar Celtic, Straide & Foxford United, Fahy Rovers and Westport United all made it through

Ballina Town cruised to a 4-1 victory over Sligo side Carbury as Mark Beattie’s side put in a brilliant display in Belleek on Sunday afternoon. In a scintillating first half Ballina went three goals up as Jesse Devers, Stephen Moyles and Benny Lavelle found the back of the net. On the hour mark Devers made it four and despite conceding a late consolation goal by Jason Lyons the North Mayo side progressed to Round 4.

Castlebar Celtic are also in the hat for the next round draw after they also had an impressive 3-1 win over West United at Celtic Park. Paul Walsh gave them a first-half lead and he doubled his tally for the day early in the second half as his deflected freekick wrong footed the West keeper to find the bottom left-hand corner of the net. West pulled a goal back with twenty minutes remaining but Celtic had the final say as Luke Kelly continued his good run of form in-front of goal as he sealed the victory in the final minutes.

Westport United needed a penalty shoot-out to see of Renmore in their third-round tie as their game finished 1-1 after extra time in Galway on Sunday afternoon. Westport were seconds away from winning the game in normal time after Dylan O’Malley’s wonder strike midway through the second half, but Renmore struck a late equaliser as they bundled home a corner kick in the dying moments. O’Malley’s goal was one to remember as his left foot strike from twenty-five yards found the top left-hand corner of the net as the young striker continues to make waves with the first team after his impressive early season form with Westport United C. Patrick Moran, O’Malley, Caoimhin O’Toole scored the spot-kicks for the away side as Gary Cunningham saved two and saw another one go wide.

Manulla were on the wrong side of the lottery of penalties in their match against Tuam Celtic in Tuam as the home side progressed after a 2-2 draw after extra time. Colin Quinn gave Tuam the lead after twenty minutes, but Padraic Beirne had Manulla back on level terms just nine minutes later. Graham Fallon gave Celtic the lead for the second time, but Manulla hit back once again as Aiden Dunleavy forced the tie into extra-time. There were to be no more goals and Tuam had the better of the spot kick battle as Manulla exited the cup.

Claremorris had a big win away against Renmore B as they put ten past the Galway side with youngster Mark Maloney having an incredible day in front of goal scoring six goals, a hat-trick in each half. Danny Broderick hit a brace with 1 coming from forty yards and Ryan Mcloughlin and Finnian Brady rounded off the scoring for Paul Burke’s side.

Straide & Foxford United also had little trouble against Galway opposition as they put five past Cois Fharraige without reply at The Green on Sunday afternoon. Johnnie Cocozza struck a brace for Aiden Flatley’s side with the other goals coming from Cathal Clarke, Darren Flatley and Tony McDermott.

Kiltimagh/Knock United looked like they could cause an upset as they held a 1-0 lead at the break over Mervue United but the Galway side hit three goals in the second half to secure their passage into Round 4 at CMS Park. Darragh Hanlon gave Kiltimagh/Knock the lead on ten minutes but second half goals from Enda Curran, Tommy Walsh and Jay Molloy were enough to see the away side through.

Premier division side Fahy Rovers seen off League One side Crossmolina with a 7-2 win at Abbeyview. Simon Duffy and Gary Concannon and Ciaran Kilcoyne all scored twice with the other goal coming from Jason Monaghan as Rovers secured a big win away from home.

Swinford exited the cup at the first attempt as they lost 4-2 against Mervue United B in a tough encounter at James McEvaddy Park.
Paddy O’Donnell and James Devanney scored the goals for Swinford while Tommy Molloy (2), Danny Kemp scored for Mervue with the fourth coming from an unfortunate own goal.

McDonnell Construction League Two
Newly crowned league champions, Westport United C, welcomed Crossmolina B to United Park on Sunday morning with both teams missing some familiar faces; however, to both team's credit a lively game developed.
Ted Horan opened the scoring for United with a well taken finish from a Liam King low cross into the box. Danny O'Hora was taken down and converted the resulting penalty mid-way through the half to leave Westport 2-0 up at the break.
Mathew Moran finished cooly early in the second half when he ran onto a trough ball and it was left to Danny O'Hora to seal a hat trick, either side of an excellent finish from winger Liam King, with two well taken finishes for the centre forward.
Crossmolina to their credit keep the game competitive right to the final whistle.
Westport will be looking to finish the campaign unbeaten when they entertain third-place Hollister next weekend when they will be presented with the League Two cup.

Ballinrobe Town kept up their winning run with a 4-2 win over Ballyheane B on Sunday morning. Goals from Connor Ryan, Owen Corcoran, Liam Burke and Jp O’Gorman made it three league wins on the trot for the South Mayo side.

Castlebar Celtic B will meet Ballinrobe Town in the McDonnell Cup Final before the end of the season and with players playing for places they had an easy 7-2 win over Conn Rangers B on Sunday morning. Kevin Quinn (2), Nicky Canning (2), Zac Collins (2) and JackMahon scored the goals for Stephen Moran’s side while Rory Langan and Ciaran Traynor were on target for Rangers.

In the final game in League Two Ballyvary Blue Bombers relegation was confirmed as they lost 5-1 away to Hollister.