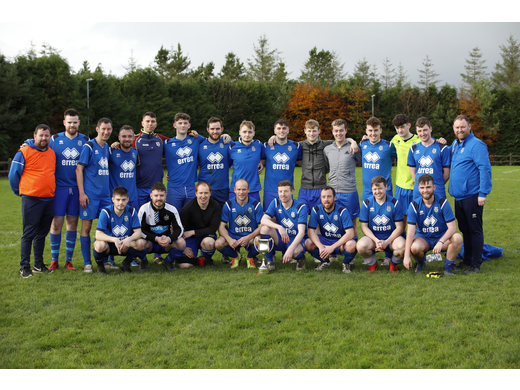 Ballyheane were within five minutes of clinching the Super League title after Jack Tuffy put them ahead against second place Ballina Town, but a late Dylan McKee equaliser keeps the North Mayo side in the title race for another few weeks. Ballyheane went into the game in front of a large crowd at Pat Quigley Park knowing that a win would end their wait for a first ever Super League title, but it was Ballina who looked the more dangerous in the first half as neither side managed to create any clear-cut chances. The second half was more of the same until Ballyheane took the lead with just five minutes remaining as Jack Tuffy bundled in a corner from Dara Ludden. Ballina though hit back and poured forward in search of the equaliser and it arrived in the eighty-eighth minute as Dylan McKee kept his side hopes alive with a near post-strike past the Ballyheane keeper. Ballyheane will have the chance to end their wait when they travel to Manulla in their next Super League match as Ballina have a week off before they face Claremorris in the final round of games.

Manulla and Westport United played out a 2-2 draw in the other game in the top half of the Super League at Carramore on Sunday afternoon. Padraig Byrne gave Manulla the lead with an excellent finish after only three minutes. Byrne pounced on a poor clearance from Gary Cunningham in the Westport goal, and he lobbed the netminder with precision from twenty-five yards to give his side the lead. Dylan O’Malley equalised for Westport midway through the half as he got on the end of a through ball from Aaron Cannon and rounded the keeper before finishing to an empty net from a tight angle. Aiden Dunleavy then gave Manulla the lead on thirty-two minutes as he finished from just inside the area after a good move from Declan Kilkelly’s side but Mark McDonagh hit another equaliser for Mickey Feeney’s side midway through the second-half to ear both sides a point.

At the other end of the table Swinford’s stay in the top flight came to an end on Sunday morning when Castlebar Celtic put three past them at James McEvaddy Park. Basho Hay gave Celtic the lead in the first half as his shot caught the Swinford keeper off-guard as he was left flat footed as the ball flew past him. Swinford had tow decent chances at the start of the second-half but Mark Howley’s excellent free-kick left the home side with a mountain to climb. Matthew Devanney missed an excellent chance to half the deficit but it was Celtic who added a third goal as James Basquille finished off a counter attack after Swinford pushed everyone forward to try to get back into the game.

Glenhest Rovers moved level on points with Ballyhaunis Town and Ballyglass going into the final round of games with a 2-1 win over Ballyglass at Beltra on Sunday morning. Goals from Pat Mulchrone and Cathal Chambers leaves the ‘Hest’ with their destiny in their own hands when they meet Ballyhaunis Town in their final league game in two weeks’ time.

CastleCourt Hotel Premier Division
It’s advantage Straide & Foxford United in the title race in the Premier Division after Kiltimagh/Knock United were held to a 1-1 draw by Westport United B. The East Mayo side remain two points clear of Straide & Foxford but Aiden Flatley’s side have a game in hand and will win the title if they can claim all six points in their two remaining games. Kiltimgah/Knock needed an equaliser from Dylan Roache to earn a point as Giles McDonagh’s side lost their advantage going into their final league game against Fahy Rovers.

Fahy Rovers got their first win since the split in the division with a 3-1 victory away to Snugboro United. Goals from Ciaran Kilcoyne, Pat Kelly and Simon Duffy earned the three points for the away side.

Conn Rangers finally moved out of the relegation zone at the bottom of the Premier Division as they needed a late Aidan Gallagher strike to see off Killala at the Courthouse on Sunday afternoon. Mark Butler gave Rangers an early lead and despite Killala levelling matters after only fifteen minutes, Rangers dug deep to earn the three points as Gallagher found the target to move his side up to seventh place and two points above the relegation zone.

Killeen Sports Ground League One
Moy Villa moved back to the top of League One with a convincing 5-1 win over fellow promotion contenders Kiltimagh/Knock United in Attymass. The away side took an early lead through Luke Bennett but it was Moy Villa who took control from there on as they put in a scintillating performance to move back to the top of the table. Ciaran Gaughan levelled matters from the penalty spot after Ger O’Donnell was fouled in the area. Gaughan was involved in the second goal shortly after as he fed the ball to his brother Adrian who found Nigle Lackey with his first time cross and the midfielder made no mistake to put Villa in front. Gaughan then added his second of the day as he found the back of the net from distance as the Kiltimagh/Knock keeper was caught in no mans land. Gaughan then set up Luke Ruane to score their fourth early in the second half before he added a second minutes later following good work by substitute Tony Loftus.

Crossmolina made light work of Kilmore as they put eight past Erris based side to move level on points with Kiltimagh/Knock United B in second place in League One. It was one way traffic in Abbeyview as Michael Canavan’s side turned on the style in this early morning kick-off. David O’Boyle scored his second hat-trick in a row while Kevin Campbell hit a brace and the other goals coming from Shane McKinley, Niall Coggins and an own goal after Ian Gordon’s wayward shot was deflected into the net by a Kilmore defender.

Achill Rovers boosted their survival hopes with an 8-1 win over Claremorris B at Fr. O’Brien Park on Sunday afternoon. Ronan Kilbane scored four for the Islanders with Brandon McGing and Terence Devers both scoring a brace to move them to within two points of Partry Athletic at the bottom of the table.

Newport/Mulranny Wanderers picked up another three points with a 1-0 win over Partry Athletic thanks to a first half goal from Aido McManamon. The winner arrived on the half hour mark as McManamon headed in a corner after some lax marking in the Partry penalty area.

McDonnell Construction League Two
Westport United C knew that a win away against Ballyvary Blue Bombers on Sunday morning would secure the division 2 title. The first 15 minutes were even enough, but a marauding run from deep by Evan Ralph and a thumping finish by the full back opened the scoring. United got their second from a corner with Danny O'Hora powering a header home at the back post. Westport led 2-0 at the break.
Playing with the breeze in the second half Westport were in control and moved the ball well with regularity. Their third goal came from their lightening winger, Liam King, who volleyed sweetly to the top corner from outside the box. Westport finished the scoring late in the game following powerful play in the box by Mathew Moran who squared the ball for Nathan Donnellan to volley to the top of the net. At the final whistle Westport confirmed their status as champions and remain unbeaten. Their goal now will be to complete the campaign unbeaten which will put them in good fettle for the Premier Cup final where they will face Westport United B in a few weeks time. This has been a fine season for Westport's academy group and will stand to the young players into the future. Ballyvary meanwhile must win their final two games in the division to avoid relegation.

Ballinrobe Town will join Westport C in League Two next season after a 3-2 win over Castlebar Celtic B on Sunday morning at The Green. Gillian Jennings gave Ballinrobe the lead midway through the first half, but Kevin Quinn equalised for Celtic on the stroke of half-time. Ballinrobe went back in front early in the second half as Jp O’Gorman fired home a penalty but Celtic hit back again on sixty seven minutes thanks to a strike from Nicky Canning. The winning goal came almost immediately though Garry Mellotte as the Robe confirmed their promotion with two games to spare in what has been an excellent season for South Mayo side.

Conn Rangers B moved level on points with Hollister after a 3-1 win over their North Mayo rivals in Mount Falcon on Sunday morning. Goals from Luke Clayton, Rory Langan and Kevin McDermott saw Rangers get back to winning ways after last weekend’s defeat to Westport United C.

Ballyheane B had a comfortable 5-2 win over Crossmolina B on Sunday morning to move into third place in the table. Ian Naughton scored a hat-trick with the other goals coming from Evan Doyle and a penalty from Darragh Scollan. Mark Rothwell and Danny McDonnell were on target for Crossmolina.

CMR Fire & Security League Three
Manulla C are the League Three champions after a dramatic final day 2-1 win over Claremorris C in the title decider in Carramore on Sunday morning. Manulla went into the game a point ahead of Claremorris and knew a point would be enough to seal the title but they went one better as they took all three points to finish four points clear at the top of the table. Claremorris started the game on the front foot but the opening goal went the way of the home-side as Keith Burke found the back of the net on fifteen minutes. Claremorris got back into the game just before the break as Newton Silva equalised from the penalty spot despite the best efforts of David Dolan in the Manulla goal. What proved to be the winning goal arrived after only two minutes of the second half when Kevin Mannion won a free-kick on the edge of the area and Niall Barrett stepped up to execute a brilliant free to put Manulla back in-front. Claremorris had a great chance to give us an exciting finish when they were awarded a second spot-kick with ten minutes remaining, but this time Dolan was the hero as he kept out Silva’s second attempt from twelve yards. This miss deflated the away side and Manulla held on comfortably to win the title and shortly afterwards Seamus Hughes from the Mayo League presented the cup to the Manulla C captain Niall Barrett. 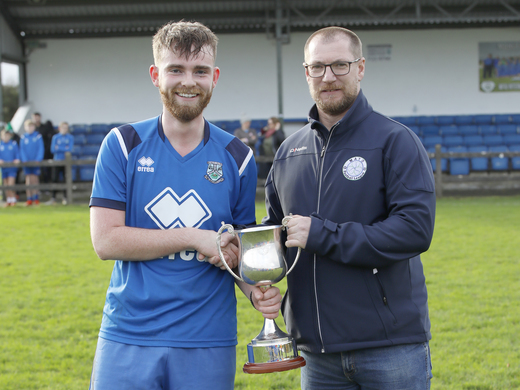