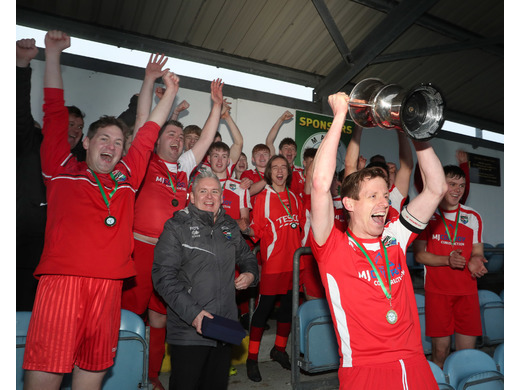 Ballinrobe Town re-joined the Mayo League this season and after winning promotion a few weeks ago from League Two they ended their season by winning the McDonnell Cup with a 1-0 win over Castlebar Celtic B earlier today at Solar 21 Park. In a game of few chances it was Ballinrobe’s Liam Burke that was the matchwinner as his goal on twenty-four minutes proved to be the difference between the sides. It was the first clear cut chance of the game as Burke got on the end of a through ball from Conor Ryan and he rounded Jack Jensen in the Celtic goal before rolling the ball into an empty net from just inside the area. Ryan had a great chance to double their lead right on half time but Ryan chipped effort was easily saved by Jensen. Celtic started the second the better side but other than substitute Zac Collins effort on fifty-five minutes they rarely threatened the Ballinrobe goal. As Celtic pushed forward they left gaps at the back and Burns should have had his second with minutes remaining after Jp O’Gorman cross found him in space at the back post but his first time effort flew wide of the right hand post. Celtic had an effort cleared of the line late on when Fionn Mahon beat Pat Finnigan to the ball only to see it cleared of the line by a Ballinrobe defender. This was as close as they came and minutes later the final whistle sounded and Jp O’Gorman lifted the McDonnell Cup for his home town club Ballinrobe Town.

Elverys Sports Super League
League champions Ballyheane ended the season unbeaten with a 3-0 win over an understrength Westport United side at Pat Quigley Park on Sunday morning. Ashley Stevenson’s side only dropped four points all season and ended their league campaign with another win. Goals from Jack Rochford, Dan Purcell and Ben Edeh.
They opened the scoring after only two minutes when Rochford volleyed home after Edeh effort was saved by Shane Nallen but the ball fell to the right-back who smashed the ball past Nallen and into the net. The second goal also came off the back of a good save from Nallen when Dan Purcell followed in to fire the ball home after only two minutes of the second half. Ben Edeh wrapped up the scoring on the hour mark as he got on the end of a cross from the right wing to poke the ball past Nallen at the second attempt.

In the other Super League tie Claremorris and Ballina Town played out a 2-2 draw at Solar 21 Park. The point secured third place for Claremorris who finished just ahead of Westport United in Paul Burke’s first season in charge. Danny Broderick gave Claremorris a half-time lead with a goal on seventeen minutes, but Ballina hit back with two quick-fire goals early in the second half through Jesse Devers with his first coming from the penalty spot. Claremorris got the equaliser in the last seconds of the game when Simon Butler got on the end of a corner from Broderick to ensure his side took a share of the spoils.