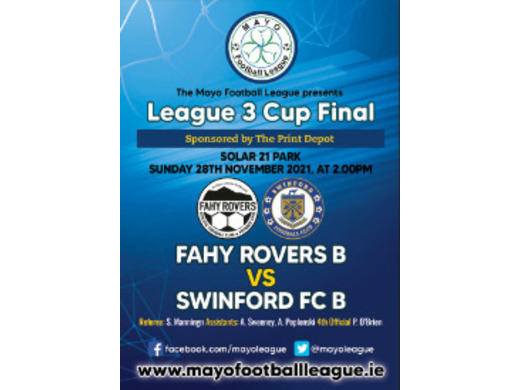 The third divisional cup final of the season takes place on Sunday when the second-string sides from Fahy Rovers and Swinford lock horns at Solar 21 Park.

After leading the league for months Swinford’s promotion chances were ended in recent weeks as they only managed to pick up two points in their last five league games as they finished third in the division while Fahy finished ten points further back. Fahy will be happy with how they finished the season after picking up only three points from the first twenty-one on offer as they went on to pick up a further seven points and made it to the final with wins over Ballyglass B and league champions Manulla C. Paul Knowles squad is mainly made up of youth players but seasoned campaigners like Ger Moore, Eric Carney, Tommy Gill, Michael Rourke, Paul Walsh and Tom Keane have all made valuable contributions on and off the field throughout the season. Ciaran Kilcoyne and Colin Hastings are players to look out for with Kilcoyne also having starred for their first team in the Premier Division. Swinford B will be hoping to recapture their early season form on Sunday having had a difficult end to the season where they’re last win came six games ago as they made it to the final with a 6-1 win over Conn Rangers C. Paul Kenny is the player manager of the East Mayo side and he has been a main stay in the centre of defence throughout the season. Adorn Biju and Johnny McNulty have led the way in front of goal with Cian Reddington also a dangerous threat in attack while Chris Reddington and Eoin Kelly have held the midfield together with some strong performances in the middle of the park. Both side have a win apiece from their meetings during the season so picking a winner on Sunday won’t be easy but the loss of Keith Kavanagh to suspension for Swinford could be a key factor in determining who gets their hands on the cup on Sunday afternoon