Ballyheane are the 2022 U21 Cup Champions after a 2-1 win over Castlebar Celtic at Solar 21 Park on Sunday afternoon.

Two early goals had Joe Redmond’s side in control inside the opening fifteen minutes and despite Celtic scoring a late goal in injury time they always looked like they were the better side on the day. In a feisty affair both sides finished with only nine men as there was four red cards in the last ten minutes as the two neighbouring sides gave it their all to get their name on the cup.

Ballyheane took the lead on ten minutes when Ben Edeh turned Shane Cunningham outside the penalty box and as he raced into the area Cunningham took him down and Ballyheane were awarded a spot kick. Captain Dean Fadden steeped up and sent keeper Peter Basquille the wrong way as he found the bottom left hand corner of the net. Four minutes later and it was 2-0 as Nathan Reilly-Doyle pounced on a loose ball in the box to fire home after good work down the right wing by Alan McHale.

Ballyheane continued to be the better side for the rest of the first half as Celtic struggled to penetrate their defence but they did have their moments early in the second have and were unlucky not to pull a goal back when James Basquille just couldn’t get on the end of a ball across the box by Luke Kelly.

The real excitement came inside the final ten minutes when both sides were reduced to ten men after an incident in the middle of the park and then just as the game entered injury time Ballyheane keeper Luca Meldrum also saw red as he pulled down Celtic substitute Alan Hegarty as he was about to score following an error in the Ballyheane defence. Luke Kelly stepped up to make it 2-1 with three minutes of injury time to go but then Celtic lost Oran Groarke to a second booking as he tried to get the ball back to get the game back underway. Ballyheane held firm in the final few minutes and soon after Dean Fadden was holding the CMR Fire & Security U21 Cup aloft in the stand at Solar 21 Park 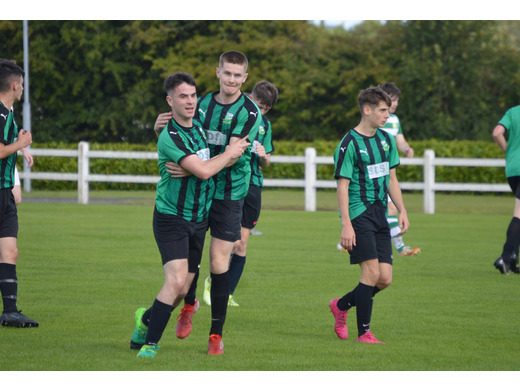 Nathan Reilly-Doyle celebrates after making it 2-0