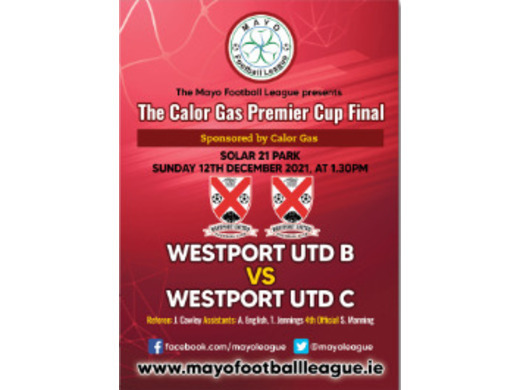 Westport United B already have one cup in the trophy cabinet after winning the Tuohy Cup earlier in the season and they will be heavy favourites to come out on top once again against a side that were playing two divisions below them this season. Amazingly they have got to the final without conceding a goal with wins over Claremorris B, Claremorris C, Fahy Rovers and Conn Rangers. They will be missing two key players as Adam Diamond-Keane and Brandon Scahill are out suspended so they will be looking to the likes of Mark McNally, PJ Calvey and Dylan Duane to make a difference in attack. Joe Kelly’s side finished third in the second tier and will look to end the season on a high, but his club compatriot Michael Horan will look to put a spanner in the works.

Horan’s entered the C team with the hope of bringing young players through from youth football to adult football so that players stay involved in the game and progress when they are ready. This has already paid dividends for the club as a whole, as six of their panel at the start of this season have played for the A team during the course of the year. The names of Cillian Whyte, Harrison Quinn, Kevin Kitterick, Sean Prenty, Ted Horan and especially Dylan O’Malley are already becoming household names in Mickey Feeney’s side and these players and the top players from the B team squad will more than likely make up the nucleus of the Super League squad for years to come. Not only have they been making appearances for the A Team they have also won the League Two Title going the whole season unbeaten dropping only two points in the process.

Horan’s side will also be without three key players as Austin O’Malley and Ryan Askin picked up injuries in the last week and Matthew Moran is also out suspended. They will also be without Michael's son Ted who is cup tied and will be in the B team squad and what makes this even more unique is that Joe Kelly’s son Conor is in the Westport C squad. Dave Hoban and Vinny O’Malley will add a bit of experience to the side and along with the suspended Austin O’Malley they have been generous in their time and expertise in playing alongside the young players this season and giving them the confidence to express themselves on the field of play.

It’s clear that both managers really care about the progression of their players and have no hesitation in moving them on to play at a higher level when they are ready and they should be delighted with the way the season has unfolded with players regularly playing with the Super League squad but to have also picked up some silverware must be a huge bonus. Westport B will be the clear favourites but don’t be surprised if it’s Westport C that get their name on the cup in what promises to be a really good game of football with the only thing for certain is that the Cup will be going to United Park on Sunday evening.