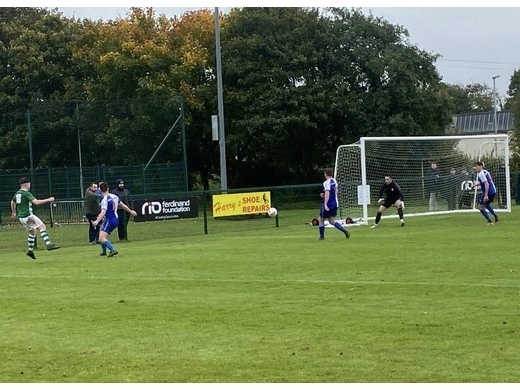 The favourites progress to the semi finals of the Calor Gas Super and Premier Cups while Fahy Rovers see off Benbulben to reach the second round of the Connacht Cup.

Kiltimagh/Knock United put in a strong second half performance to overturn a one goal deficit at the break against Glenhest Rovers in a nine goal thriller in Beltra. Glenhest Rovers put up a brave performance as they led 3-1at one stage but James Costello’s side hit back to end up winning 6-3 to set up a semi final clash with Westport United in a few weeks time. Glenhest took an early lead as Pat Mulchrone struck his first of the day but the away side were level minutes later through James McGrath. Mulchrone then hit two more to complete his hat-trick and leave Kiltimagh/Knock with a mountain to climb but Liam McCormack’s goal just before half-time gave them the believe that they could go on to win the tie in the second half. Just after the hour mark they were level for a second time as McGrath hit another goal and two minutes later they took the lead for the first time as Jack O’Connor got his name on the scoresheet. New signing Mark Maloney added a fifth with fifteen minutes to go and Tadgh Caulfield put the icing on the cake with the final goal in the closing minutes.

Westport United seen off a potential shock as they came from a goal behind to earn a 4-1 win over Premier Division side Conn Rangers at United Park. PJ Gilmartin gave Rangers the lead five minutes before the break with an excellent free-kick that found the top right and corner of the net but the home side hit back quickly as Darren Browne scrambled home the equaliser after he was quickest to react after the Rangers keeper save rebounded in his direction. Westport were much more dominant in the second half and went in front after just two minutes when Darren Browne struck the goal of the game as he curled the ball into the top right hand corner of the net from twenty five yards. Four minutes later and Westport made it three as Dylan O’Malley pounced on an error by the Conn Rangers keeper to slot the ball into an empty net from just inside the penalty area. Adam Nugent then made his entrance from the bench and didn’t take long to make an impact as he headed in their fourth as he got on the end of a free-kick from James O’Donnell. Nugent completed the scoring as he got an the end of a superb pass from Cillian White to chip the onrushing keeper as Westport seen out the game with little trouble.

In the tie of the round Castlebar Celtic travelled to Belleek to take on Ballina Town and it was Stevie Gavin’s side that booked their place in the semi finals with an excellent 3-0 win to set up a mouth watering clash with Super League Champions Ballyheane. Jordan Loftus and Mark Howley had Celtic in control at the break and a third from Oran Groarke made it a comfortable last twenty-five minutes for the Hoops.

Calor Gas Premier Cup
On Saturday evening Manulla B showed they mean business in the cup as they had a 6-1 win over Conn Rangers C in Carramore.

Westport United C will play Manulla B in the semi final of the Premier Cup after a 3-2 win over Partry Athletic in United Park on Sunday morning as Dan O’Malley hit a late winner for Michael Horan’s side. O’Malley opened the scoring on twenty minutes when he pounced on an error in the Partry defence to fire the ball past Sean Og Burke from eight yards. Partry turned the game around inside the first fifteen minutes of the second half as they scored twice in three minutes as Fianach MacGabhann headed in their first and then Martin Fox stroked the ball into an empty net as Niall O’Malley failed to hold onto a cross into the box. Their joy was short live though as Cillian McGing levelled the scores for a second time a minute later as he finished low into the bottom right hand corner of the net from a tight angle. Just when it looked as the game was heading into extra time Dan O’Malley popped up to head in the winner in injury time as he got on the end of a right wing corner from Cillian McGing.

Conn Rangers B came from a goal down to see off League Two side Ballyvary Blue Bombers as they had a 3-1 win at Mount Falcon on Sunday morning. Ballyvary opened the scoring midway through the first half but it was Rangers who secured a place in the semi-finals as Kyle Neary, Shane Bourke and Aaron Faughnan all hit the target for Patrick Armstrong’s side.

Cup favourites Ballinrobe Town made it a clean sweep of League One sides in the semi-finals of the Premier Cup after a 5-2 win over Ballyheane B. Jp O’Gorman hit a brace with the other goals coming from Garry Mellett, Jake Mulcahy and Gillen Jennings.

Connacht Cup 1st Round
Fahy Rovers were the only Mayo side in Connacht Cup action this weekend and they had a convincing 4-1 win over Sligo side Benbulben. Gary Concannon hit two goals with Jack Staunton and Simon Duffy also on target for John Creaby’s side.