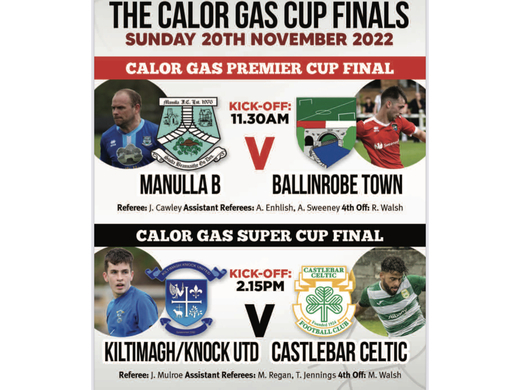 Castlebar Celtic v Kiltimagh/Knock United – Sun 2.15pm – Solar 21 Park
Kiltimagh/Knock United are appearing in the final of the top cup competition in the county for the very first time on Sunday but they will need to be at their very best if they are to get their hands on the trophy as they face an inform Castlebar Celtic side that have knocked out Ballina Town and Ballyheane on their route to the final. Kiltimagh/Knock were the surprise package in the Super League this season as the newly promoted side finished in fourth position two points ahead of Celtic in fifth spot. James Costello’s side have been praised for their attacking style of play during the season and it with players like Jack O’Connor, James McGrath, Jack Mullarkey and Liam McCormack in their squad they have had no problems scoring goals with O’Connor been one of the players of the season scoring nineteen goals in all competitions. In the semi-final O’Connor scored twice in a 4-2 win over Westport United with McCormack pulsating game at CMS Park.
Castlebar Celtic are appearing in their fifth Calor Gas Super Cup Final in nine years but they will be well aware that they have had only one victory in that time with a 4-2 win over Ballyglass in 2016. The seven times champions lost the following two finals to Ballina Town so they will be keen to stop the losing run in finals on Sunday against a side they have already beaten twice this season. Celtic came out on top in both meetings with star striker Jordan Loftus getting a brace in both games. It may seem like Loftus has had a quite season in front of goal but believe it or not the Celtic front man has twenty-two goals in all competitions with only Benny Lavelle ahead of him in the scoring charts. They will be missing Jason Hunt through suspension but the addition of Joe Slevin from Claremorris in recent weeks has really strengthened the squad. Johnnie Cocozza is another man in excellent form and will be a real danger man for Stevie Gavin’s side.
Celtic seemed to have hit a rich vein of from recently as they have also reached the 5th round of the FAI Junior Cup in a twelve match unbeaten run. It will be a huge occasion for both sides on Sunday and a big crowd is expected in Solar 21 Park and if the two recent meeting are anything to go by we could be in for a thrilling match.

Calor Gas Premier Cup Final Preview
Ballinrobe Town v Manulla B – Sun 11.30pm – Solar 21 Park
Ballinrobe Town and Manulla B will meet for the fourth time this season when they come face to face in the Calor Gas Premier Cup Final on Sunday. Ballinrobe have got the better of Damien Joyce’s side on all three previous occasions and go into the game unbeaten this season with a chance of adding the Premier Cup to the League One Title and Tonra Cup victories from earlier in the season. The South Mayo side have tasted a lot of success since they rejoined the League last year and after two promotions and two divisional cup wins they could really put the icing on the cake by adding a third trophy to their haul this year. Their defence has been key to their achievements this season with the addition of Sean Shaughnessy been one of the main reasons they only conceded eight goals in the league. An injury to winger Connor Ryan has ruled him out of the final but Garry Mellett looks a more than able replacement and on the other wing Danny O’Toole has been one of the players of the season in League One. Jp O’Gorman will more than likely lead the line for Pat O’Sullivan’s side and his strike partner Shane Ryan has also been in good goal scoring form this year. Manulla B’s line up will be much more difficult to predict as Damien Joyce has a big squad to choose from and has used a lot of different players during the season. They have had a spread of different scorers throughout the season with veteran striker Roger Clarke leading the goalscoring charts while Shea Benson, Matty Nolan and Cian Benson also finding the net on a regular basis. Aaron Walsh has also hit form at the right time of the season as he has hit four goals on their run to the final. They just missed out on promotion from League One by one point and were knocked out of the Tonra Cup by Ballinrobe after a penalty shootout in a game they were six minutes from winning until Jp O’Gorman struck an equaliser to send the game to penalties. Overall Ballinrobe have to be favourites to lift the cup on Sunday but it would be no huge surprise if their unbeaten run was ended and Manulla B had their name on the Premier Cup for the first time.

RT @KCsixtyseven: Joseph N'Do is the first former Achill Rovers player to work as a pundit on a World Cup. Unless @kdkilbane77 played a few…