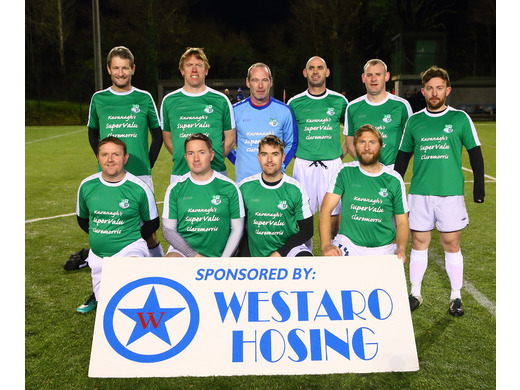 With just one week of league play remaining in both divisions of the Mayo Masters League, we are going right down to the wire across a number of different fronts.

With the destination of the title still to be decided, and two teams still battling to avoid the drop, the excitement in Division One will hit fever pitch on Wednesday night, the final night of the league season. While in Division Two, four teams still have a mathematical chance of finishing second to Claremorris and securing promotion.

In Division One’s opening game of the night, Manulla took advantage of putting pressure on Westport, who played later in the night, by moving three points clear at the top with facile 10-3 victory over an already relegated Swinford side. James Cunningham, John Kelly and Roger Clarke all hit a hat trick each for Manulla, with Barry Cuffe also on target. Eoin Gallagher, Robbie Quinn and Dermot Walsh were on the score sheet for Swinford.

Conn Rangers’ hard fought 4-1 win over Swinford ’C’ leaves them in third place in Division Two, just one point off Straide and Foxford United and promotion with one game remaining. JP Guiheen put Swinford ‘C’ in front after just eight minutes, before Shane Sweeney equalised for his side. It was still 1-1 with ten minutes remaining, before late strikes from Trevor Warde (two) and Mark McHale secured all three points.

After a somewhat inconsistent season, Brendan Giblin’s last minute winner guaranteed survival for Ballina Town, with a 4-3 win over Swinford ‘B’ moving them two points clear of Castlebar Celtic and Fahy Rovers, who play each other on Wednesday evening. Michael Noone (two), Aidan O’ Hora and Giblin banged in the goals for Ballina, while Jakub Gawalkiewicz (two) and Billy Murphy netted for Swinford ‘B’ who have confirmed third place in the table.

Manulla ‘B’ have given themselves an outside chance of promotion, after they defeated Achill Rovers 9-5 in Division Two’s second game of the evening. Sharpshooter Alan Rumley hit another hat trick for Manulla ‘B’, with Darragh Lyons (two), Michael Cuffe (two), Colin Walsh and Des Gibbons also on the score sheet. Ray McNamara (two), Kris Jablonski, Darren Molloy and Michael O’ Hara were on target for Achill, who drop to fifth and look set to miss out on promotion.

Westport United ensured the rejoined Manulla on 28 points on top of Division One, with a comfortable 7-3 win over Castlebar Celtic. Danny Scahill bagged two for the red and black, with Mark McNally, Brian Kennedy, Joe Lawless, David Cameron and Vinny O’ Malley also on target. For Celtic, Ashley Stevenson netted two fine goals, with Bryan Mannion also finding the net. The loss means Celtic and Fahy Rovers are now fighting for their lives, with both sides on 11 points with one game remaining, and to make it even more interesting, they play each other on Wednesday evening.

Goal of the Day: Ashley Stevenson produced a wonderful bit of skill and finish, for Celtic’s first goal of the night v Westport United.
Goalkeeper of the Day: Declan Sweeney was once again solid as a rock between the sticks for Conn Rangers.
Player of the Day: Alan Rumley inspired his Manulla ‘B’ side to victory, netting three important goals at important times.