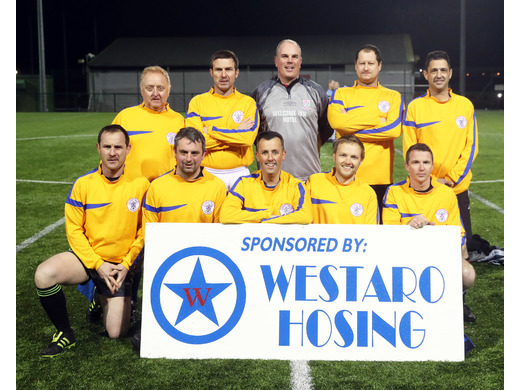 The excitement has reached fever pitch in Division Two, with two more results blowing the title race wide open. Castlebar Celtic have re-entered promotion contention thanks to a huge win over Achill Rovers, while Westport United made it eight wins from eight in Division One, but had to be at their best against a determined Swinford ‘B’ team.

Kiltimagh/Knock United and Conn Rangers got the ball rolling with the opening game of the night, and what a thriller it was. KKU will look back with some regret, having dropped two more points as they look to challenge for the title. However, Conn Rangers were good value for their draw in a competitive and sometimes fiery tie, with their goals coming from Declan Sweeney and Ger Lovett. Daruisz Medrela scored the first for KKU, with a late equaliser from Andy Leadbetter securing a share of the spoils.

Manulla got back to winning ways in Division, as despite giving Fahy Rovers a 3-0 head start, they battled back to win 5-4 in an enthralling contest. Goals from Guillaume Viadie, Tommy Gill and Tommy Conroy had Fahy in a commanding lead, before Roger Clarke, Brian Donnelly, John Kelly levelled matters for the victors. Malachy Byrne had Manulla 4-3 in front, only for Michael Goggins to restore parity, before Roger Clarke once again came up trumps and netted the winner for his side.

Claremorris B continued their solid season with a 6-3 win over Swinford in the second game in Division Two. The victors were 5-1 up at the break, and despite a mini Swinford revival, Claremorris B rallied late to secure the win. Brendan Vahey (3), Carlos O’ Gara, Alan Neville and Ger Brady bagged the goals for the South Mayo men, with Val Kenny, Dermot Walsh and David Golden on target for Swinford.

Westport United were made to work hard for their three points, against a resilient Swinford B side who gave as good as they got in their attempts to add points to their tally. Westport United raced into an early 2-0 lead, and there was a fear that it may only get worse for Swinford B. But to their credit, they responded magnificently, staying in the game right until the final whistle. David Hoban was in clinical form for Westport, scoring four, with Mark McNally, Danny Scahill, Sean Hoban and Tom Burke also on target. Keith Robinson scored three for Swinford B, along with goals from Paul Kenny and Patrick McDonnell.

Castlebar Celtic have propelled themselves back into the promotion race, with their victory over Achill Rovers leaving both sides locked on the same points in second place, one behind current leaders, Kiltimagh/Knock United. With only four games remaining, it looks like it could go to the wire. Celtic’s goals were scored by Ashley Stevenson, Eamonn Crean, Stephen Jennings and Marty McNicholas, with Martin Doolan and Mark Davitt finding the net for Achill Rovers.

A dominant performance from Ballina Town saw them record a facile victory over an under strength Straide and Foxford United side. The introduction of Mick Duffy to master’s ranks is sure to make things interesting over the coming weeks, as he helped himself to four goals on the night. Mark Beattie (3), Cormac O’ Malley (2), Malachy McCarron (2), Eamon Cawley (2) and Tom O’ Connor (2) also found the net for the Town, with John O’ Hara responsible for Straide and Foxford’s solitary response.

Ballyhaunis Town and Manulla B played out a cracking 4-4 draw in the final game of the night. Despite being two goals in arrears early on, Manulla B fought back to level terms at the interval, before coming from 3-2 down and 4-3 down to eventually secure a share of the spoils. Kevin Shannon (2), Paul Finn and Martin Conlon were the scorers for Ballyhaunis, with Darragh Lyons, Mick Cuffe, Alan Rumley and Mark Basquille on target for Manulla B.

Player of the Day: David Hoban gave a ruthless display of finishing, as he scored four times to secure three points for Westport United.

Goal of the Day: Marty McNicholas’ delicate chip with the outside of his left foot for Castlebar Celtic was a thing of absolute beauty.

Goalkeeper of the Day: Ray Murray produced a solid display between the sticks for Claremorris B.

Third Eye: Seeing a ‘keeper score is a rarity, but how about two in one game? Spectators of the Kiltimagh/Knock United and Conn Rangers tie were treated to exactly this, as Daruisz Medrela and Declan Sweeney both found the net for their sides.