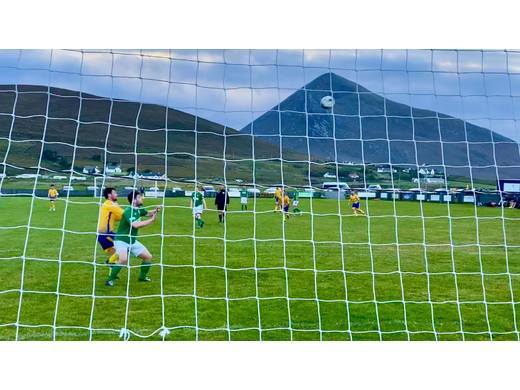 Liam Irwin cemented Ballyheane’s place in the top five as he hit a superb first half hat-trick as Ashley Stevenson’s side made it five wins in a row with a 4-0 win over Glenhest Rovers. Irwin has been in outstanding form this year and now that he is adding goals to his all round game, he is sure to be a handful in their remaining five games. Two of the goals are available to view on the Ballyheane Twitter page and are worth the watch!! Paddy Bourke added the fourth in the second half to leave Glenhest without a point in their last four games.

Castlebar Celtic secured their place in the top five as they came out on top in a high scoring game against Swinford at James McEvaddy Park on Saturday evening. Gordie Carter gave Swinford the lead on twelve minutes but Celtic were level just three minutes later as Jordan Loftus grabbed his first of the day. Celtic then took complete control as Lerlah Hay gave them the lead before Loftus added two more as he completed his hat-trick before half-time. Joe Slevin gave the home-side some hope as he pulled a goal back before Loftus made it five with another well taken goal. Ritchie Dalton pulled another back for Swinford with ten minutes remaining but that was as good as it got for Liam Foy’s side who remain just a point above the relegation zone.

Ballina Town kept in touch with Westport Untied at the top of the table with a hard-earned win over title rivals Manulla in Carramore earlier today. In difficult conditions Manulla were the better side for most of the opening period but it was the away side that went in front just before half-time when the league’s top scorer Benny Lavelle added another to his total with an excellent low finish from just inside the area. Manulla fell further behind when Ballina won a freekick over forty yards from goal out on the right wing and Dylan McKee’s ball into the area was missed by everyone and found it’s way into the back of the net. Manulla piled on the pressure with Gerry Canavan coming closest on more than one occasion but Lavelle had the final say in the last few minutes as he scored his second of the day to take his tally to twenty league goals.

In the other early game this morning Ballyhaunis Town and Ballyglass took a point apiece in a thrilling 4-4 draw at Station Rise. Ballyhaunis were two down on two occasions but fought back to take a crucial point in their battle to avoid the drop. Liam Hughes and Conor Keane both hit doubles for the away side while Gary Higgins, Jamil Kezze, Sam Olabude and Hamad Althobhahey were on target for Ballyhaunis.

Westport United maintained their three point lead at the top of the table with a 5-2 win over Claremorris at United Park. In a nip and tuck first half Westport took the lead as Phil Keegan gave them the lead as he headed home a corner from Cian McAllister. Claremorris equalised minutes later but Westport were back in front seven minutes later as Cian McAllister reacted quickest as Darren Browne initial effort was saved by the Claremorris keeper. Claremorris equalised again right on half time but Westport came out a different side in the second half to earn the win with three second half goals. James McGrath restored their lead inside the opening two minutes as he drove the ball to the back of an empty net from thirty five yards after a the Claremorris keeper mishit his clearance from a backpass. Keegan then got their next goal as he headed in a freekick from Mikey O’Brien on seventy five minutes before Darren Browne wrapped up the scoring from the penalty spot after Peter Corcoran was taken down in the box.

CastleCourt Hotel Premier Division
Straide & Foxford United continued their winning run as they made it five wins in a row with a thumping 8-2 win over Iorras Aontaithe on Saturday evening. Iorras went into the game two points ahead of their opponents but are now in danger of falling out of the top five when the league breaks in two after next weekend’s games. Straide & Foxford lead 4-1 at the break as Kienan Smyth continued his good run of form in front of goal with a double and Brian Heneghan and Sean Malone also getting on the scoresheet. Smyth then completed his hat-trick minutes into the second-half before Michael Guilfoyle and Paul Moran also got in on the act with Smyth also adding another to bring his tally to nine for the season.

Westport United B got their first win in three games as they came from a goal down to record a 3-1 win over Killala at United Park. After eighteen minutes Aiden Ferguson gave the away side the lead from the penalty spot, but Westport went in ahead at the break with two goals in as many minutes just before the break. The first also came form the penalty spot as Niall Quinn fired home from the twelve yards after Ferguson was harshly adjudged to have fouled Mark McNally in the area. Quinn then turned provider as his pull back from the left wing was brilliantly turned into the net by Ciaran Cuddy. The next goal was always going to be crucial and arrived the way of the home side as Johnny Smith found the net as his attempted cross flew over everyone and slipped through the hands of the Killala keeper who was blinded by the strong sun.

Fahy Rovers moved out of the relegation zone with a 5-0 win over bottom side Snugboro United on Saturday evening. The goals came from Conor O’Malley (2), Jack Staunton, Simon Duffy and Ger Moore.

In the top of the table clash in the Premier Division Kiltimagh/Knock United returned to the top of the table with an impressive 2-0 win over Conn Rangers at CMS Park. Dylan Webb scored an early opener for the home side but they had to wait until the seventy fifth minute to get the insurance goal as Dylan Roache beautiful Panenka from the penalty spot sealed all three points for Giles McDonagh’s side.

Ballina Town B’s chances of making the top five in the Premier Division were given another boost on Sunday afternoon as they ground put a tough 2-1 win over Manulla B in Belleek. Veteran Mick Duffy and Shane Devers got the all important goals as Ballina moved level on points with Iorras Aontaithe while the defeat sees Manulla remain level with Killala in the second relegation spot.

Killeen Sports Ground League One
Title favourites Moy Villa sent out a warning to the teams behind them on Saturday evening with a crushing 9-2 win over Crossmolina in Attymass. Midfielder Ciarán Gaughan opened the scoring with a tidy finish after a brilliant pull-back from Durkan but Crossmolina equalised shortly after as Kevin Campbell made it one all. Gaughan turned provider as Moy Vlla went back into the lead when his long range pass found the feet of Luke Ruane who ran from the wing and finished brilliantly to make it 2-1 at half-time. Ruane then made it three before he turned provider to set up Gaughan who got his second of the game. Paul O’Boyle from centre back got his second goal in as many matches when he brilliantly finished from a corner to make it five before Gaughan grabbed his hat-trick after another brilliant pull-back from Durkan to make it six. Luke Ruane then wrapped up his hat-trick after Andrew Ruane’s pass found the feet of the striker and his long-range effort found the back of the net. Nigel Lackey made it eight when he was quickest to react from Durkans cheeky-chip which rebounded of the crossbar and it was Durkan who finished off the scoring for the home side when he converted a penalty. An unfortunate own goal gave Crossmolina their second of the day but it made little difference as Moy Villa moved a step closer to promotion.

At the other end of the table Achill Rovers moved above Crossmolina and out of the relegation zone with a 3-1 win over Claremorris B on Saturday evening. Chris Western opened the scoring after fifteen minutes only for Claremorris to get back level seven minutes later. Sean McNamara scored from the penalty spot in the 26th minute after Keith McGinty was taken down in the box to give the home side a deserved lead and substitute Kristof Jablonski completed the scoring with a further goal in the final minutes

Newport/Mulranny Wanderers moved back into second spot in League One on Sunday afternoon as they hit Kilmore for four goals in blustery conditions in Drum. Playing with the aid of the strong breeze in the first half they were well in control at half-time as Jack Hanley, Fintan McManamon and Mark Gill were on target for Charlie O’Donnell’s side. Kilmore failed to test the strong Newport/Mulranny defence in the second period and Steven Patten completed the scoring with a neat finish in the final minutes.

CMR Fire & Security League Two
Kiltimagh/Knock United B returned to the top of League Two as they recovered from going two goals down as Gavin Groarke hit a winning penalty for the second match in a row. Martin Delaney and Martin McDonagh gave Hollister the two-goal lead and they looked like they were going to get right back into the promotion race as Danny Langdon placed the ball on the penalty spot but the division’s top scorer failed to convert the chance and not long after Kiltimagh/Knock were back in the game as Mario Majeic got his first of the day. Majeic levelled the scoring inside the opening ten minutes of the second half and moments late Groarke hit the winner from the spot as Hollister were reduced to ten men which ended their chances of getting the win they badly needed.

Crossmolina B moved level on points with their opponents Conn Rangers B at the bottom of the table as they got their first win of the season in Abbeyview this morning. Crossmolina went in a goal up at the break thanks to a Stephen Rochford strike and they also dominated the second half as Rochford grabbed his second and Barry Molloy also getting in on the scoring. Ciaran Traynor got the consolation goal for the away side.

It as a family affair at Celtic Park on Sunday afternoon as not only did father and son pairing Stevie Ryan and Ethan Minogue start for Castlebar Celtic B in their 2-1win over Ballyvary Blue Bombers but both scored as Stephen Moran’s side moved to within two points of promotion. Ryan gave Celtic the lead in the first half but Ballyvary were back on level terms on fifty-three minutes as Mark Cusack found the back of the net but it was Minogue who had the final say as Celtic took all three points.