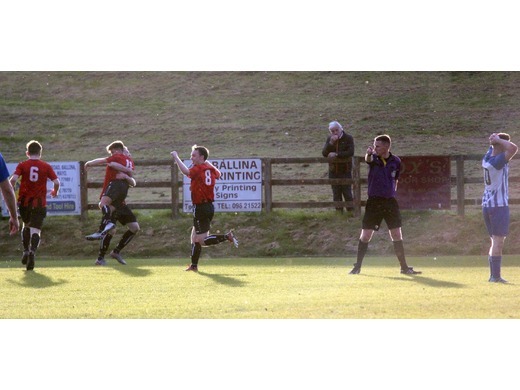 All eyes were on the top of the table clash in Belleek on Saturday evening where Westport United recovered from conceding inside the opening two minutes to seal a 2-1 win over Ballina Town thanks to Cian McAllister’s seventy fifth minutes strike. Ballina were given an early chance from the penalty spot after Joe Lawless was penalised for a high boot inside the area and they opened the scoring as Fabiano was quickest to react as Benny Lavelle’s effort was saved by Gary Cunningham. Westport though responded with a penalty of their own less than ten minutes later as Phil Keegan was upended by Ballina keeper Emmet Peyton. Darren Browne took the responsibility on himself and he made no mistake as he fired the ball into the left-hand corner of the net. There was little to separate the sides before the break Westport took control as the second half went on and McAllister volleyed home the winner with fifteen minutes remaining as he got on the end of a cross from substitute James McGrath. Westport’s strong defensive unit has been a key element of their early season form, but they were rarely tested in the final minutes as Mickey Feeney’s side moved three points clear at the top of the table.

Castlebar Celtic put a bad run of results behind them as they recovered from being a goal down at half-time to grind out a 2-1 win over Ballyhaunis Town as Jordan Loftus hit the winner for Michael McNicholas side. Ballyhaunis went in a goal up at the break but Celtic had turned the game on it’s head within ten minutes of the restart as first Davitt Neary scored on his Super League debut and his strike was quickly followed by the winner from Jordan Loftus.

Swinford moved out of the relegation zone on Sunday morning when they got their first three points of the season on the board as James Devanney’s struck four goals in a very impressive 5-0 win over Claremorris. Devanney returned from injury in recent weeks and his goalscoring ability is just what Liam Foy’s team needed as they had been unable to turn some good performances into wins earlier in the season. Devanney scored twice in the first half and got a third just two minutes into the second period and he added a fourth after Ryan Convey had saved a penalty from Finnian Brady in between. Peter McNicholas added a fifth and Swinford moved up to eight place a point above Glenhest Rovers and Ballyhaunis Town.

Manulla moved level on points with Ballina Town in second place as they dug out a 2-1 win over Glenhest Rovers despite going behind to a Cormac Reilly freekick just before half-time. Manulla performance improved in the second half and two quick-fire goals midway through the half sealed the points for Roger Clarke’s side. The first came from right-back Sean Morrissey as he headed home a super cross from Andrew Shally at the back post. Two minutes later the winner arrived as Aiden Dunleavy continued his fine start to the season as he reacted quickest after Alan Brennan’s effort was saved by the Glenhest keeper.

In the final Super League game Ballyheane powered to their fourth win in a row as a Nathan Reilly Doyle hat-trick saw them secure the points against Ballyglass to move to within a point of making the top five at the split in the season. Ashley Stevenson’s side are playing an attractive brand of football and Reilly-Doyle had them in the lead at the break with a goal on the stroke of half-time. He added another with ten minutes to go and his hat-trick arrived minutes later as the youngster hit three in a match for the first time.

CastleCourt Hotel Premier Division
In the top of the table clash in the Premier Division Conn Rangers moved two points clear at the summit with a deserved 2-1 win over Iorras Aontaithe on Saturday evening in Mount Falcon. Despite having a host of early chances Rangers had to wait until the twentieth minute to take the lead as Owen McNamara kept his cool from the penalty spot after Iorras were penalised for a handball in the box. Rangers were the dominant side throughout, but they had to wait until ten minutes from time to add a second as Jason Farrell scored his first goal of the season. Dylan Walker did get a consolation goal for the away side, but his late penalty came with little time for Iorras to mount a comeback.

Joint leaders Kiltimagh/Knock United failed to keep pace with Conn Rangers at the top of the table as they were held to a surprising 0-0 draw by Manulla B in Carramore. The top scorers in the division had an off night in front of goal as Mossy Lally’s struggling side picked up an important point in their battle to avoid the drop.

Straide & Foxford United continued their recent run of form as they got their fourth win in a row to consolidate their position in the top half of the table as they put five goals past relegation threatened Fahy Rovers at Green Road on Sunday morning. Michael Guilfoyle had them in front within the opening five minutes and they doubled their lead before half-time as Brian Heneghan converted a penalty that he had won himself moments earlier. Brian Reape made it three shortly after the break and then a Kienan Smyth double wrapped up the points for Aiden Flatley’s side.

Snugboro United were within two minutes of claiming their first league win of the season but John Foy’s late goal from a corner earned Westport United B a point at United Park. Conor Sloyan gave Snugboro the lead after quarter of an hour and Aaron Curry’s side looked a different outfit than they had done recently but the concession of the late equaliser means they remain rooted to the bottom of the table.

Ballina Town B boosted their hopes of a top half finish with an impressive 5-1 win over local rivals Killala at the Courthouse earlier today. Ryan Moran, Pj Gilmartin and an own goal had them in a comfortable lead before Rory Gallagher pulled one back for the home team. Moran added his second and Jamie Moyles was also on target as the current Premier Division champions showed some of the form they showed last year when they went unbeaten in the league.

Killeen Sports Ground League One
Moy Villa got back to winning ways with an emphatic 4-1 win over bottom of the table Claremorris B in Attymass on Saturday evening. Goals from John Durkan and Ryan McLoughlin had the sides level after half an hour, but Moy Villa’s Paul O’Boyle got the crucial third goal on the stroke of half-time an Hugh Langdon’s side never looked back after that. John Judge Jnr and Luke Ruane added further goals in the second half to ensure Villa sit at the top of the table at the halfway point of the season.

Kilmore moved into second position in League One as they followed up Thursday night’s victory over Achill Rovers with a 2-1 win at home to Partry Athletic on Sunday afternoon. Kilmore started well and took the lead on twenty-five minutes when James Flannery opened the scoring from a twenty five yard free-kick. Kilmore’s efforts on Thursday night began to show as the half wore on and Partry levelled matters from the penalty spot as Ciaran Hennelly held his nerve after Dean Shuaghnessy was taken down inside the area. Partry started the second half as they ended the first but failed to test Liam Keane in the Kilmore goal. Kilmore’s bench made the difference in the end as they rang the changes with twenty minutes remaining and it was one of these substitutes that hit the winner as James Kelly scored his second goal in as many games with a brilliant effort from just inside the area.

Going into the West Mayo derby Newport/Mulranny Wanderers were joint top of League One but Achill Rovers put a spanner in the works as they claimed a share of the spoils in an entertaining 2-2 draw. Brandon McGing had Rovers in front inside fifteen minutes, but the sides went in on level terms at the break as Fintan McManamon scored on the stroke of half-time. Newport/Mulranny looked to have taken all three points as Jack Hanley put them in front for the first time but Conor McGinty ha the final say as his wonder goal earned them a share of the spoils with six minutes remaining.

CMR Fire & Security League Two
Hollister got themselves back into the promotion race as Danny Langdon continued his good start to the season with four goals in a 5-1 win over Conn Rangers B. Langdon had them two up before Josh Kelly pulled one back for Rangers but the goal made little difference and Langdon added two more while Martin Delaney also got his name on the scoresheet with a well taken goal.

Castlebar Celtic B looked to be on the way to taking all three points as they went into a two goal lead against Kiltimagh/Knock United B earlier today but it was the East Mayo side that came away with the points thanks to goals from Thomas Gillespie, Arnas Zilionis and Gavin Groarke. Kevin Quill’s early double had Celtic in control, but Gillespie pulled one back from the spot before half-time. Zilionis levelled matters early in the second half and Groarke held his nerve to slot home the winner after Kiltimagh/Knock were awarded their second penalty of the day late on.

Westport United C needed a late winner to remain at the top of League Two as Crossmolina B put in their best performance of the season despite been on the wrong end of a five-goal thriller. Barry Molly and Stephen Rochford got the goals for Crossmolina and they will be disappointed to have conceded such a late goal against the league leaders as Adam Diamond Keane (2) and Liam King scored the goals for the Covies.