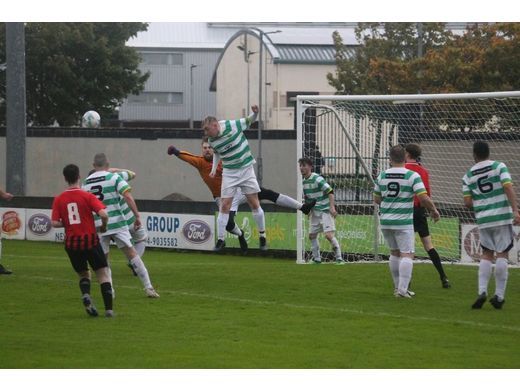 Elverys Sports Super League
Ballina Town made it five wins from five with a 2-0 win over a battling Glenhest Rovers side in Beltra on Saturday evening. In very wet conditions Duane Helly scored his second goal of the season as he gave the away side the lead on thirty-three minutes after a sustained spell of pressure. They had to wait until the eighty minutes to make sure of the points as star striker Benny Lavelle made it thirteen goals in five games with the insurance goal for the league leaders.

Claremorris had to come from behind to get their second win of the season as they came from two goals down at half time to grind out a 4-2 win over neighbours Ballyhaunis Town. Gary Higgins hit a first half double for Ballyhaunis but Claremorris were back in the game just two minutes into the second half as James Ruane scored his first goal of the season. Shortly after Dean Roddy levelled the scoring as he finished low into the bottom right hand corner of the net following an excellent first touch moved him clear of the defence. Jack Ronayne scored the crucial fifth goal before Dean Roddy made sure of the points as he slid in at the back post to finish a well worked move down the right wing.

Castlebar Celtic’s title defence was struck another blow on Sunday morning as they fell to a 3-1 defeat against rivals Manulla, which was their second defeat in three days following Thursday nights defeat in Westport. Manulla were quickest out of the blocks and had a two-goal lead inside the opening ten minutes thanks to goals from Gerry Canavan and Lorcan Conroy. Canavan opened the scoring as he reacted quickest to a bouncing ball in the area to fire the ball home from ten yards while Conroy finished of an excellent team move down the left wing with a well struck finish from just inside the area. Aidan Dunleavy then made it three nil before the half hour mark but Jordan Loftus gave Celtic a bit of hope as he headed in a goal right on the stroke of half-time. This was as good as it got for the home team as Manulla put in a strong defensive performance in the second half and their were no further goals as Roger Clarke earned his first win over Celtic as a manager.

Westport United joined Ballina Town on twelve points as two second half goals were enough to earn them all three points against Ballyglass on Sunday afternoon. Westport were far from their best in the first half and went in all square at the break as James O’Donnell spurned their best chance when he saw his sixth minute penalty saved by the Ballyglass keeper. All of the home-sides good work was undone in the second minute after the restart as Cian McAllister bundled the ball home after a long throw into the box was fumbled by the Ballyglass keeper. They scored the crucial second goal fifteen minutes later as Gary Cunningham’s long clearance was flicked into the path of Phil Keegan via the head of Peter Corcoran and the striker kept his composure to finish low into the Ballyglass net.

Swinford’s search for their first win in the top division goes on for another week as a late strike from Sean Kilcoyne secured the points for Ashley Stevenson’s Ballyheane side. In a very even game the winner arrived with ten minutes remaining as Kilcoyne’s shot from just outside the area deflected of Gordie Carter and nestled into the bottom right hand corner of the net despite keeper Ryan Convey getting a hand to it.

CastleCourt Hotel Premier Division
Conn Rangers 100% start to the season came to an end on Saturday evening as local rivals Straide & Foxford United got their second win in a row to move further up the table. In a game of few chances it was Aiden Flatley’s side that came out on top thanks to a second half goal from Conor Sherry. Sherry scored the only goal of the game from a long freekick that deceived everyone and bounced in the box before nestling in the back of the net.

Kiltimagh/Knock United took advantage of Conn Rangers defeat to join them at the top of the table as three second half goals were more than enough to put an end to Westport United’s B recent winning run. Kiltimagh/Knock survived the first half against the wind and took the lead on fifty minutes when Dylan Webb was quickest to react after Micheal Gibbons failed to hold onto a shot from the edge of the area after a well worked short corner by the visitors. They doubled their lead on seventy minutes when Sean Murphy’s brilliant freekick left Gibbons with little chance as it flew into the top right-hand corner of the Westport net. The third goal arrived seven minutes later as Iarla Carty reacted well to fire the ball past Gibbons as it bounced around in the area following a good save by the Westport keeper.

At the other end of the table Manulla B and Fahy Rovers played out a 1-1 draw in Carramore on Saturday evening. Both goals came in the first half as Manulla took the lead inside the opening few minutes as Jason Cunningham calmly finished past the Fahy keeper after he got on the end of a long ball out of defence from Lee Lyons. Fahy were level soon after as Johny Doyle pounced on a mistake from Bryan O’Flaherty in the Manulla goal to tap the ball into an empty net.

Snugboro United are still looking for their first win of the season after a heavy defeat against Ballina Town B on Sunday morning. Aaron Curry’s side are finding it difficult to get the winning mentality back into his side after last years relegation from the Super League. Ballina lead 3-0 at the break as Caleb Daly, Shane Devers and a Jamie Moyles goal direct from a corner left them in full control. Ryan Moran made it four shortly after the break before Luke Honan and Jamie Langdon struck further goals to move Ballina out of the relegation zone.

Iorras Aontaithe put last weekend’s heavy defeat to Westport United B behind them as they came from behind to record a 4-2 win in Killala earlier today. Michael Corrigan had Killala in front inside the first five minutes but Iorras struck back to lead 3-1 at the break. Mark McDonnell pulled a goal back for Killala before Iorras made sure of the points as they added a fourth goal. The Iorras goals came from Eamon Cary (2), Jason Boylan and Dylan Walker.

Killeen Sports Ground League One
In the only game in League One on Saturday evening Achill Rovers and Kilmore will have to do it all again after the game was abandoned within the opening fifteen minutes due to the adverse weather conditions.

Crossmolina finally got of the mark in League One as they secured their first three points of the season with a surprise 2-1 win over joint league leaders Newport/Mulranny Wanderers. Kevin Campbell gave them a half time lead and even though the away side equalised before the hour mark it was Campbell who was to have the last word as he struck the winner with fifteen minutes remaining.

That defeat for Newport/Mulranny opened the door for Moy Villa to take the sole lead at the top of the table but Partry Athletic had other ideas as they pulled of a shock win away in Attymass. At the break it looked like Moy Villa’s unbeaten start tot the season would continue as they led through a long range effort from Ciaran Gaughan but Partry battled back to take all three points thanks to goals from Conal MacGabhan and Dean Shaughnessy.

CMR Fire & Security League Two
Hollister had a comprehensive win over Crossmolina B on Saturday evening as Vinny Coen’s side got their second win of the season. Both Danny Langdon and Josh Delaney hit hat-tricks while Martin McDonagh (2), Martin Delaney (2), Brandon Conlon and James Queenan were all on target in this North Mayo derby.

In the other game on Saturday night Westport United C and Castlebar Celtic B were involved in a seven goal thriller which the Covies came out on top to move to within a point of leaders Kiltimagh/Knock United B. Westport lead at the break as Adam Diamond Keane continued his good start to the season but Celtic levelled shortly into the second half as Bryan Mannion scored his second in as many games. Ted Horan had Westport back in front almost immediately only for Nicky Canning to draw the sides level again. Declan Lavelle then put Celtic in front for the first time but Westport weren’t to be denied and Oisin Ryall levelled the scoring again and then Danny O’Hara hit the winner late on after Celtic were reduced to ten men.

Ballyvary Blue Bombers got their first win of the season with a 3-0 win over Conn Rangers B on Sunday morning. Ballyvary have made a few new signings in recent weeks and it was one of these that proved the difference between the two sides as Pat Lynch hit a first-half hat-trick for Alan Campbell’s side.