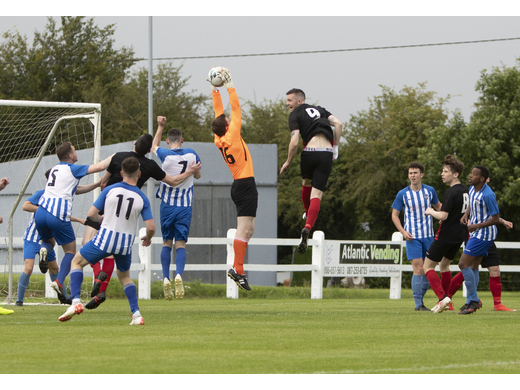 Connacht Summa Champions Cup
Ballina Town were comfortable 6-1 winners over Galway Premier Division side Athenry in the Quarter-Finals of the Connacht Summa Champions Cup on Sunday afternoon. In what looked a tough assignment for the Super League Champions they led 3-1 at the break and added a further three in the second half to qualify for the semi finals in their first appearance in this competition. Benny Lavelle hit a hat-trick with the other goals coming from Dylan McKee, Duane Helly and Dylan Edwards.

Westport United joined Ballina in the Semi Finals as they came from behind to win 3-1 away to the Galway league champions Mervue United. The home side went in ahead at the break as Jonny Hanafin was first to react to head the ball into an empty net from three yards out after an initial header came back off the crossbar. Westport were level fourteen minutes into the second half as Darren Browne fired home from the penalty spot after Mark McDonagh was fouled in the box. Browne was instrumental in their second goal four minutes later as his brilliant chipped pass found Phil Keegan who excellent first time shot was to powerful for the Mervue keeper as it found the bottom left hand corner of the net. With thirteen minutes remaining Westport put the result beyond doubt as Jesper Frisch headed home a corner from Jack Murphy.

CastleCourt Hotel Premier League
Ballina Town B put in a strong second half performance as they put eight past Manulla B in Carramore on Sunday morning. Daniel Gorman and Shane Devers did the damage with seven goals between them. Gorman gave them an early lead on five minutes as he headed home a cross from Conor Quinn. Lorcan Conroy got Manulla back into the game only for Jordan Delaney to restore Ballina’s lead minutes later. Shane Devers then got his first of the day with a brilliant flicked finish to chip the Manulla keeper only for the home side to hit back with their second goal before half-time through Michael Fahy. Manulla then levelled the scores once again as David Leneghan was quickest to react after Neil Langton spilled the ball at his near post. Devers though went three clear at the top of the goalscoring charts as he got the next two goals to complete his hat-trick as Ballina finally took full control of the game. Daniel Gorman then added three more goals to add further gloss to the scoreline as Mark Beattie’s side remain unbeaten with just two league games to go.

Swinford missed the chance to more or less seal promotion to the Super League as Kiltimagh/Knock United propelled themselves back into the race with a 3-2 win at CMS Park. Swinford will be extremely disappointed with the result especially after they led 2-0 thanks to goals from James Devanney and Joe Slevin. Devanney gave them the lead as with a brilliant left foot volley after the ball ricochet into his path following some good play from Joe Slevin. Slevin then doubled their lead as his long range shot somehow went though the body of the Kiltiamgh/Knock keeper and rolled over the line. Kiltimagh/Knock half the deficit before the break as the unmarked Darragh Hanlon slotted the ball home after a terrible mistake by a Swinford defender. Kiltimagh/Knock pushed on in the second half and levelled the scores when Stephen Collins bundled the ball home at the second attempt as Swinford failed to clear a corner from the left. Dylan Webb then pounced to score the winner as he calmly slotted the ball home from inside the area to secure a crucial win for Aiden Flatley’s side.

Killeen Sports Ground League One
The League One promotion and title race will go down to the final day with three teams still in contention for the final two places. Killala look odds on to be one of the two as they face relegation threatened Castlebar Celtic B but the other spot is really up for grabs as the two sides in contention meet in Abbeyview next weekend.

Crossmolina knew they had to win today to remain in the race and they did so convincingly with a 6-0 win away to Claremorris B. Shane Hennigan scored another hat-trick for Derek Graham’s side while Shane McKinley, Patrick Lindsay and Shaun Cadden were also on target for the North Mayo side. A win next weekend over Westport United B will secure promotion while Michael Gibbons side will know a point will mean they will be playing Premier Division football next season. Westport themselves had a 4-2 win against Partry Athletic as they remain level on points with Killala at the top of the table. Luke Dawson and Player of the month for July Mark McNally both scored twice for the Covies while Ciaran Hennelly and John Anthony O’Hara got the goals for Partry.

Calor Gas League Two
The title race in League Two will also go down to the final day as Moy Villa and Newport/Mulranny Wanderers both had big wins on Sunday afternoon.

Moy Villa put eleven past local rivals Ballina United and will be crowned champions if they beat Kiltimagh/Knock United B next weekend. Luke Ruane (3), Ciaran Gaughan (2), John Judge Jnr (2), Tony Loftus (2), Brandon Conlon and John Judge Snr hit the goals for Hugh Langdon’s side as they moved to within a win of winning their first title on their return to Mayo League soccer.

Newport/Mulranny Wanderers also had little trouble in brushing aside Snugboro United B as they came away with a 7-1 win from Edward Conway Park on Sunday afternoon. Adrian McManamon (3), Dean Guthrie (2), Robbie Calvey and Stephen Patton got the goals for Charlie O’Donnell’s side as they remain unbeaten for the season in league and cup and also confirmed their promotion to League One.